The Ontario Liberal Party suffered one of the worst political defeats in the province’s modern history, ending 15 years of majority rule.

The Liberals fell short of official party status, with just seven seats, less than the eight required to maintain extra funding in the legislature.

After her party’s fate became clear, Kathleen Wynne, who took the unusual move of conceding the election last weekend, resigned as Liberal Leader after five years in the Premier’s Office.

“It is the right thing to do,” she said through tears. “There is another generation, and I am passing the torch to that generation.”

Despite a volatile campaign, the Liberal defeat was not unexpected with recent public-opinion polls showing the party lagging in distant third place. In admitting last weekend that she wouldn’t be premier, Ms. Wynne called on Ontarians to vote Liberal to prevent either of her rivals from forming a majority government, a strategy that failed.

Mr. Murphy said the party’s long reign had created an “insurmountable” appetite for change among voters. “It’s time for renewal and soul-searching but we’ve got four years to do it,” he said.

Ms. Wynne, who took over from Dalton McGuinty in 2013, entered the campaign as an intensely disliked leader who had been the country’s most unpopular premier for almost two years.

Some Liberal candidates ran without using Ms. Wynne’s image or name on their signs. Others didn’t even put the word Liberal in their campaign materials.

At Mr. Sousa’s election headquarters in Mississauga, supporters gathered in silent disbelief as news of the PC majority win began to trickle in.

In an interview, Mr. Sousa proudly referred to the Liberals’ budget accomplishments but said: “I think we did so much, all at once.”

Alex Gregory, a long-time supporter of Mr. Sousa, said Ms. Wynne’s decision to concede the election early was the wrong move for the party. “I don’t think it worked the way she wanted it to.”

Volunteers for Ms. Naidoo-Harris were on the verge of tears while waiting for their candidate to arrive at a local bar. “It is tough to go door-to-door and hear Kathleen Wynne is the problem,” said Tiauna Munroe-Crooks, 20.

St. Catharines MPP Jim Bradley, who was trying to become the longest-serving member of the Ontario Legislature in history, lost his seat to the NDP’s Jennie Stevens. “The provincial vote for change was very overwhelming, so we’re really not surprised,” Mr. Bradley said.

The Liberals faced widespread public anger, including for soaring electricity prices and the privatization of Hydro One. In addition, a host of scandals damaged the party’s brand, including the cancellation of two gas-fired electricity plants that eventually led to the conviction earlier this year of Mr. McGuinty’s chief of staff, David Livingston, for unauthorized use of a computer and attempted mischief.

“There was a headwind,” said Nelson Wiseman, a political science professor at the University of Toronto. “There’s 15 years of baggage there.”

Despite the challenges Mr. McGuinty left behind, Ms. Wynne’s Liberals won a nine-seat majority in the 2014 election after major gaffes from then-PC leader Tim Hudak.

Several of Ms. Wynne’s most prominent cabinet ministers opted not to run for re-election this time, including Eric Hoskins, Deb Matthews, Liz Sandals and Brad Duguid.

Under Ontario rules, political parties need eight seats to maintain official party status in the legislature. With less than that, parties lose research funding and the right to ask questions in Question Period.

However, an even more critical disadvantage is that with so few seats, the Liberals risk losing their standing as a relevant force in the province, Prof. Wiseman said.

“The Liberals will be fighting for their lives politically,” he said.

The last major decimation of an Ontario governing party was in 1923, when the United Farmers of Ontario went from 44 seats to just 17.

Opinion: What’s to like about Kathleen Wynne: She improved things for women 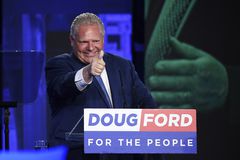 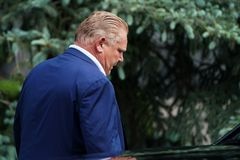