Now that the 13-week strike at York University is officially the longest labour dispute at the institution, and the longest strike at an English-speaking university in Canada, the provincial Liberals are pointing to the battle as an example of the kind of protracted labour fight an NDP government would tolerate.

“This strike could have ended four weeks ago,” said Mitzie Hunter, the Minister for Advanced Education and Skills Development, who is campaigning for re-election in Scarborough-Guildwood. “It’s a demonstration of the risks of an NDP government, … they are putting ideology ahead of the collective public interest of Ontarians,” she said.

The NDP blocked back-to-work legislation introduced by the Liberal government only days before the legislature was dissolved in early May. If elected, the party would never force striking workers back to work, NDP Leader Andrea Horwath promised last week.

Instead, the NDP’s platform contains a pledge to introduce a “faculty renewal strategy” that would convert part-time instructors to full-time professors. Precarious academic work emerged as a key issue in both the York dispute and last year’s strike by Ontario college workers.

“No one is well served, especially students, when you have a revolving door of precarious faculty,” said Peggy Sattler, the advanced education critic for the NDP, who is running for re-election in London West. The pledge would address the underfunding of higher education that is leading to strikes in the sector, she added.

The Conservatives have remained silent on an issue that could split voters who are undecided between the two parties.

“We respect the collective bargaining process, but after 85 days, it’s time to bring this to an end. The NDP will always side with the unions, regardless of the damage done to students,” a spokesperson for the Doug Ford campaign said in a statement.

Wednesday marks the 86th day in the current strike by part-time and contract instructors, graduate assistants and researchers, exceeding the 85-day record set by York in 2008-09 when the same workers walked the picket lines. Unlike a decade ago, however, the university did not end classes during this year’s strike, attempting to reduce the impact on its 50,000 undergraduates.

Part-time teaching contracts and funding for master’s students have been two of the key outstanding issues. An independent investigator appointed by the province said in a late April report that the two sides had little chance of reaching a deal at the bargaining table, which prompted the Liberal government’s failed back-to-work legislation.

Students say they have lost jobs and delayed their plans for graduate or professional programs as a result of the dispute.

Now some are facing a change in their convocation plans.

Erin Anderson-Birmingham, a political-science student, says she had been looking forward to a graduation ceremony on the Glendon campus on June 23. But the university has announced that Glendon’s June convocation will be held at the main Keele campus instead, on June 20.

“Every single class I have taken has been at Glendon,” Ms. Anderson-Birmingham said. “I don’t have any positive sentiment for the Keele campus.”

Ms. Anderson-Birmingham is also not sure if she should attend the Keele ceremony, or wait for the fall October convocation date at Glendon. She has one course for which her work and a grade will have a final assessment once striking instructors are back in class. The university is entering “provisional grades” for students in their last year of studies, but that grade will be reviewed and reassessed when the dispute ends.

“I can go to the June ceremony, walk across the stage, and if the strike ends in July, then I go back to class,” she said.

“What graduate school is going to accept a student who is graduating with two or three courses with made-up grades,” said Julian Arend, a vice-president of CUPE 3903.

But Lisa Philipps, York’s interim provost, defended the decision to let students graduate without finishing course work. Each student who receives such a mark has had their record reviewed by an associate dean and the grade was calculated based on their university average, Ms. Philipps said.

“We have enough confidence that they are solidly on track to succeed that by giving them a placeholder grade, [it is] on the clear understanding that we will be requiring them to complete the course that is missing and make any adjustment that is needed,” she said.

York University students frustrated as strike drags on
May 17, 2018 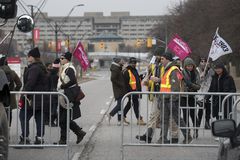 ‘We feel like pawns’: York University students grow increasingly angry over strike
May 10, 2018 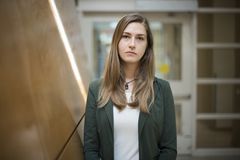