For this feature, Globe B.C. borrows from Marcel Proust (and media that have popularized the French author’s famous questionnaire) as a way to get to know notable people around the province.

1. Do you have a non-work-related passion or hobby? What is it?

I love to hike and cycle, swim outdoors, snowshoe in the winter … just being outdoors is the way I relax and recharge. I always have a sketchbook going. It’s a creative outlet and focuses the mind in a manner different from work.

2. If you have $1-million to give to a charity, what cause or group would you select and why?

The YWCA Metro Vancouver, of course! The organization has a primary focus on supporting single mothers to achieve personal and economic independence and ensuring that children get the best possible start in life. This is the best way to break the cycle of poverty that contributes to social ills like homelessness, addiction and violence.

3. Which living person do you most admire?

I’m going to pick my friend, Anne Giardini, chancellor of Simon Fraser University, former CEO of a major corporation, dedicated volunteer and board director, and a mother of three. She’s published two novels and edited several works of non-fiction. She is a renaissance woman for the 21st century … and she knows how to be a good friend!

4. What do you most value in your friends?

Civility and respect for others.

5. What was your first paying job?

My father was a geological consultant and, as a young teenager, he employed me in his office to do various administrative tasks. He taught me basic accounting, business writing and office procedure. That is a gift that gave me a real advantage when I entered the formal workforce.

6. What is the best present you have ever been given?

Getting fired from a job. A bitter pill at the time, but it taught me self-reliance, to set my own agenda and to take control. I’ve never looked back.

7. If you could change one thing about yourself, what would it be?

I’d love to be able to speak multiple languages, and I greatly admire people who do. I’m hoping to carve some time to learn a bit of one of the Indigenous languages of B.C.

8. What is your guiltiest pleasure?

Old Hitchcock films are a real indulgence, but not one I feel guilty about. So, I guess it’s the treats that go along with them.

9. What trait do you most despise?

Arrogance and unkindness, which generally go together.

10. What do you consider your greatest achievement?

I’m very proud of the work I did with my colleagues at the YWCA Metro Vancouver. We delivered critical front-line services – housing, child care, food programs, legal services, employment – and undertook advocacy on critical social issues such as early child development, violence against women, and sexualization and hypermasculinity.

11. The best movie you have seen in the past year?

I like documentaries, so I’ll select two: One of Us, which depicts three young people who have chosen to leave their Hasidic Jewish community; and Ex Libris: The New York City Public Library.

12. The best book you have read in the last year?

Seven Fallen Feathers by Tanya Talaga. She will be delivering the 2018 Massey Lectures and I’m hoping to do something special to support her.

The Handmaid’s Tale was a brilliant interpretation of Margaret Atwood’s famous dystopian novel.

14. What most inspires you?

16. An object you still own from childhood?

My grandmother’s gold medal for academic achievement in Grade 12. She inspired her extended family and community to pursue advanced education. The medal reminds me of the importance of women’s education.

17. What is the greatest issue facing Vancouver or B.C.?

Growing inequality and the related challenges, such as the affordability of housing, child care and transit.

18. What life lesson have you learned this year?

It’s later than you think.

Check your ego at the door.

20. If you could be a fictional character for one day, who would you like to be?

Well, it’s got to be Jane Austen, so I would have to say Elizabeth Bennett in Pride and Prejudice.

How B.C.’s head of state Judith Guichon chose a minority government over an election
April 19, 2018 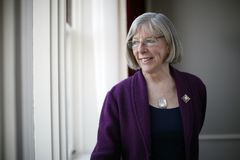 Janet Austin named British Columbia’s new lieutenant-governor
March 20, 2018
Follow Ian Bailey on Twitter @ianabailey
Report an error Editorial code of conduct
Due to technical reasons, we have temporarily removed commenting from our articles. We hope to have this fixed soon. Thank you for your patience. If you are looking to give feedback on our new site, please send it along to feedback@globeandmail.com. If you want to write a letter to the editor, please forward to letters@globeandmail.com.
Comments