British Columbia is blaming Telus after call centres for COVID-19 vaccine appointments were overwhelmed, while the province also faces criticism over the lack of an online booking platform.

Premier John Horgan said Tuesday that the government takes “full responsibility” for the system being overloaded but the contractor has acknowledged it failed to meet expectations.

Horgan said he’s “profoundly disappointed” that one health authority did not have a backup call centre and relied solely on the one provided by Telus, resulting in jammed phone lines.

“We had a bad day yesterday,” Horgan said. “We being all British Columbians that live in Vancouver Coastal Health. We’re taking steps today to correct that.”

Horgan said the province was not prepared for 1.7 million calls within the first three hours of the system opening for people aged 90 and up as well as First Nations residents over 65.

Health Minister Adrian Dix has said about 80,000 people are in those categories, but about 26,000 of those have already received a shot in a care home or another setting.

Just under 15,000 appointments were booked Monday, as many frustrated residents reported getting a busy signal or a recorded message telling them to call back later.

Fraser Health was the only authority with an online option for booking appointments and 8,722 were made there, while the Interior and Vancouver Island health authorities each recorded just under 2,500 bookings and residents in the north made just over 1,000.

Only 369 bookings were made in Vancouver Coastal, and Dix said that’s because it was the only authority without a backup call centre to support the one provided by Telus.

However, he said Telus should be held accountable for the failure in that region.

“Vancouver Coastal Health ... is in the business of providing health care,” Dix said.

“They contracted with a provider who is in the call centre business. That provider let them, but more importantly let people over 90 and over 65, down yesterday.”

Dix said the company repeatedly assured the province, even as late as 9 p.m. Sunday night, the call centres were adequately staffed. However, he said he believes the number of people committed to the centres by Telus “simply were not there” on Monday.

The staffing issues were compounded by technical problems, he said.

“To say that I’m disappointed or frustrated is an understatement,” Dix said. “People should be mad that the service provider didn’t come through here.”

More people were trained overnight and on Tuesday to answer calls, including about 100 people in the Vancouver Coastal Health region, he said.

Those who call this week are scheduling appointments for next week. Every week, a new age group is set to become eligible, so the demand on the system is expected to increase.

Dix said if Telus is “unable to deliver,” then B.C. is actively looking at alternatives.

Telus president Darren Entwistle said in a statement he is “incredibly sorry” for the frustrations that residents have experienced and the company can and will do better.

“Our team has been working around the clock to scale capacity and respond to the unprecedented demand,” he said.

Entwistle says Telus promised to have 156 agents answering calls at all times to schedule vaccinations across the province. By Tuesday afternoon, it will have more than 250 agents taking calls.

“We will ensure that all eligible British Columbians can book their vaccine in the time frame set out by the province.”

However, many residents trying to book appointments have questioned why Fraser Health was the only authority with an active online booking platform.

Dix has said that call centres are the focus of booking at this time because of the advanced age of those eligible, but a provincewide web-based system will be ready on April 12.

The minister did not directly answer questions on Tuesday about why the province did not begin work on an online platform months earlier to have it ready for this week.

“There will be a provincewide system in place. We want to make sure it’s ready and it works,” he said. “What we need to do this week is get everyone the appointments they need for next week.”

Another 550 cases of COVID-19 were reported in the province on Tuesday with two more deaths.

“Today marks a sombre milestone: one year since the first person in British Columbia died as a result of COVID-19,” said a joint statement from Dix and provincial health officer Dr. Bonnie Henry.

Another 182 cases have been confirmed as variants of concern for a total of 576 cases, most of them are linked to the strain first found in the United Kingdom, the statement said.

With files from Camille Bains 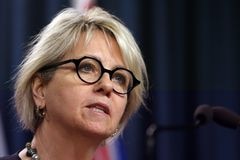 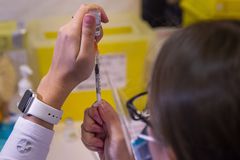