Justine Hunter
Published May 22, 2020 Updated May 22, 2020
Comments
Please log in to listen to this story. Also available in French and Mandarin. Log In Create Free Account

When Kate Spence secured one spot, just once a week, for her older daughter in British Columbia’s $10-a-day childcare pilot program, she felt like she’d won the lottery.

“She was running and playing and covered in mud, and she had the biggest smile when I picked her up," Ms. Spence said, adding that when her daughter will move into kindergarten "she will be ready to learn.”

A universal daycare program was a key election promise of the NDP, but three years into its mandate, there are only 50 sites offering $10-a-day childcare as a pilot project. Now, advocates say, this program could play a critical role in helping British Columbia rebuild from the pandemic-induced shutdown of the economy by allowing parents of young children to get back in the work force. But the government isn’t ready to expand.

Ms. Spence, an elementary teacher in Surrey, works two days a week. With two preschoolers at home, the cost of child care outweighs the benefit of working full time.

With in-class learning in B.C. resuming in June – after being suspended for most students in March – Ms. Spence wants to be there for her students, but she is not sure how she will be able to do that without child care.

“I think of my students as they come back. I want to get in there and contribute, do what I am trained to do, to be a part of that rebuilding,” she said. “But there is so much uncertainty about the future. … If I can’t find care for my kids, I can’t do that.”

A majority of daycare operations were suspended in March when the province declared a state of emergency because of the COVID-19 pandemic. As B.C. moves toward reopening the economy, the resumption of daycare services for the broader population will be slow. The provincial government has offered support to keep child-care spaces open for the children of essential-services workers. That is the only service Ms. Spencer’s daycare is offering at the moment, so she doesn’t know when her daughter might be welcomed back.

Before the shutdown, she oversaw 14 daycare programs, with a total of 460 children in attendance. The programs were suspended March 20, and her team is now preparing to take a handful of those children back in June.

What’s missing, she said, is a set of clear guidelines from the province on how daycares can safely reopen. "I’m looking at our spaces. I am halving my ratio [of caregivers to children] so that everyone is comfortable and the kids can be taken care of,” she said.

Demand for child care will be difficult to predict, as well. The province’s unemployment rate jumped to 11.5 per cent in April, with more than 260,000 jobs lost in that month alone. Starting this week, B.C. has allowed many businesses and facilities – including restaurants, hair salons and gyms – to reopen under new pandemic safety guidelines, but many employers are still working out how, or if, they will open their doors again.

Premier John Horgan said Wednesday he remains committed to expanding child-care services: "As we come out of COVID-19, what I see as one of the bright spots is that uniformly across the economy, people understand now and recognize the importance of child care to a robust economy that includes everybody.”

Ms. Merton said the sentiment is nice to hear, but she’d like to see early-childhood educators treated like essential-service workers and supported accordingly. When the province announced a $4-an-hour salary top up for many front-line service workers earlier in the week, child-care workers were not included. “It was like a punch in the gut,” she said.

Mr. Horgan’s New Democratic Party eked out a victory in the 2017 election campaign based on promises to make life more affordable, a platform that attracted all-important support from young urban voters squeezed by the high cost of living. The marquee commitment was the $10-a-day child care plan that has been stalled by the pandemic.

“We’re developing a child-care network in British Columbia because we desperately need it for our economy to be strong, and for all people in B.C. to participate – men and women," Mr. Horgan said Wednesday. “The challenge, of course, is that we are in a different time than we were in January. We had a 10-year plan to implement child care across British Columbia and that has been abruptly stopped because of COVID-19.”

Sharon Gregson of the Coalition of Child Care Advocates of BC said the universal child-care plan needs to be fast-tracked. With the economy diving at a speed not seen since the Great Depression, she said it will be harder than ever for parents to get back into the work force.

The government has “to double down on making child care a priority,” she said.

But Mr. Horgan, speaking at a news conference, said a faster-than-planned expansion of universal daycare is unlikely given the many other demands being placed on his government’s $5-billion pandemic recovery fund.

“I understand and respect very much the advocacy within the child-care community," he said. "It was their advocacy that got us to a place where I was sworn in as Premier of British Columbia with a focus to create more childcare spaces, and I’m not backing away from that for a minute. But I believe accelerating the plan that we already had in place is not likely in the short term.”

Ms. Gregson said that’s a mistake. “The Premier is quite correct that many British Columbians voted for the NDP in the last election on his commitment to the $10-a-day plan. Now we need him and Finance Minister Carole James to listen to economists and parents who are saying clearly that access to affordable child care is directly linked to jobs.” 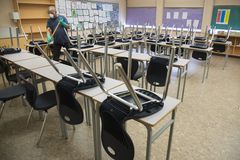 Parents weigh options as Alberta daycares prepare to reopen as early as May 14
May 12, 2020 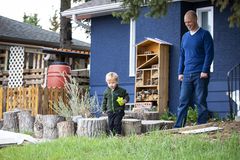