The City of Vancouver’s agreement with Airbnb to restrict and regulate short-term rentals doesn’t require the company to remove listings that don’t comply with the rules, including obtaining a business licence.

Instead, city officials will still have to go after those illegal operators on their own, although with the help of data and home addresses supplied to the city by Airbnb.

City officials say they would have preferred that Airbnb had taken on the job of de-listing people without proper business licences. “It’s not to say we didn’t talk about that in our negotiations,” Vancouver’s director of licensing, Kathryn Holm, said. “But the perspective that was shared with us [by Airbnb] was that it’s the responsibility of the city to enforce bylaws.”

That provision came to light after a local activist, Rohana Rezel, recently obtained a copy of the city’s memorandum of understanding with Airbnb through a freedom-of-information request.

The five-page MOU stipulates that Airbnb can’t be held liable for any information provided by its hosts that is incorrect or inaccurate, nor for anything hosts do that violate city bylaws.

The Vancouver MOU also contained a stipulation about the procedure for business licences that puts the onus on the city to chase down some hosts.

Airbnb hasn’t allowed a new listing to go up without a business licence since April 19. As well, the company says it will remove any pre-April 19 hosts from its site if they haven’t got a business-licence number by Aug. 31.

But if existing or new hosts choose to put in a fake number on Airbnb’s listing form, as some have been doing, or use the same number for multiple listings, it will be up to the city, not Airbnb, to try to shut them down.

“Airbnb will not be responsible for removing from its platform any listings that have incorrect registration numbers or are otherwise invalid,” the memo says. “Similarly, the City may pursue enforcement action against Hosts that have otherwise violated provisions of any City bylaws. Airbnb shall not be responsible for removing listings from its platform that belong to such Hosts that have violated provisions of City bylaws.“

The city has had around 900 applications for business licences so far, out of 6,600 listings on Airbnb earlier this year. Airbnb has about 80 per cent of all listings for vacation rentals in the city.

Ms. Holm said the data-sharing agreement with Airbnb will make it easier for city staff to spot and track down owners without proper business licences. And, while the Vancouver agreement isn’t perfect, “It’s narrowed our search significantly.”

She said many cities around the world are struggling with the issue and no one has devised the perfect system yet. “None of these is foolproof.”

Vancouver’s new bylaw gives the city the power to impose fines as high as $1,000 a day for illegal listings.

The city announced last week that about 400 listings had disappeared from the site since the new regulations kicked in on April 19. As well, the city is investigating about 1,500 operations altogether, including 89 operators who appear to be commercial and 100 hosts who have entered duplicate or fake business-licence numbers.

Airbnb spokeswoman Alex Dagg said in an e-mail statement that the company is the only platform trying to work with the city on this issue and that the agreement “provides the city with the tools they need to enforce their regulations, including sharing the address and licence number for every listing on Airbnb.”

The Expedia/VRBO/HomeAway platform also has hundreds of listings in the city, but has no requirement yet for its hosts to enter a business-licence number.

Ms. Holm said the city is in discussions with that platform on an agreement similar to the one with Airbnb. 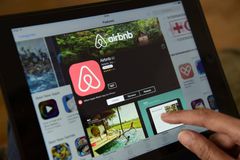