A man on trial for entering a Vancouver home and killing a couple who were strangers to him may have been in a “gaming consciousness” at the time, linked to his passion for video games, a psychologist has testified.

Edward Shen offered the view, based on about 11 hours of interviews with Rocky Rambo Wei Nam Kam, during testimony Friday at Mr. Kam’s trial in British Columbia Supreme Court. The case is being heard without a jury by Justice Laura Gerow.

Mr. Kam has pleaded not guilty to two counts of first-degree murder and, in testimony this week, said he has no idea why he killed the couple. His lawyers have said Mr. Kam committed the killings believing he was in a video game and could not form the intent to commit the first-degree murder he is accused of.

“Perhaps Mr. Kam was operating in a gaming consciousness.”

Under questioning by Mr. Kam’s lawyer, Glen Orris, Mr. Shen said he expected Mr. Kam’s understanding of reality was impaired, compromising his ability to understand the consequences of what he was doing. Previously, court heard Mr. Kam would play for as many as 15 hours a day.

Mr. Shen said the defendant told him he enjoyed games that involved “ambushing, breaking in, spying and assassinating."

"These were the themes that were common among the games,” Mr. Shen testified.

On Sept. 26, 2017, Mr. Kam, having moved from Calgary to Vancouver for the “nice beaches," said Mr. Shen, was roaming Vancouver’s Marpole neighbourhood. Although he had a knife, twine and gloves in his backpack, he has has testified he did not buy the items intending to use them to kill someone.

The recent economics graduate from the University of Calgary came upon 64-year-old Dianna Mah-Jones at her house unloading groceries from her car. He has testified he forced his way into her house, stabbed her to death, then attacked and killed her 68-year-old husband, Richard Jones, in the home when he came upon the scene.

Mr. Shen said Mr. Kam told him he killed the couple, but was unable to explain why he did so, and seemed to be trying to figure out why he did what he did.

The psychologist said Ms. Mah-Jones screamed when he covered her mouth to prevent her from screaming, an action that he said puzzled him. “He said, ‘Characters in a game don’t scream,’ " Mr. Shen told the court.

He said Mr. Kam may have appreciated consequences to his conduct, but they would have been the consequences of a game.

Born in Hong Kong, Mr. Kam is one of three children of an engineer father and an accountant mother, who also was a teacher. He moved to Calgary because he thought he would get into a better university than in Hong Kong, Mr. Shen testified.

He studied economics, but failed to get a job after a “half-hearted” effort to do so, then moved to Vancouver in the summer of 2017, Mr. Shen said Friday.

Mr. Kam, named Rocky Rambo because of his father’s affection for Sylvester Stallone movies, had a poor relationship with the rest of his family, the psychologist told the court.

Mr. Shen, recounting his discussions with Mr. Kam, said the defendant’s affection for video games began in his early teens when his family bought a household computer. The obsession deepened in Vancouver after he decided social relationships were meaningless because “people are always pretending and fake."

Instead, he preferred online relationships, Mr. Shen said. “He finds those conversations much more meaningful."

Mr. Shen did not diagnose any specific psychological disorder in Mr. Kam.

In response to questioning, Mr. Shen said his training came in one part of a one-semester forensic psychology course he took at Simon Fraser University in the 1990s. 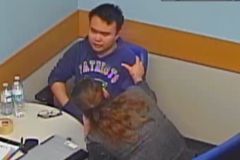 Man charged with second-degree murder in double homicide of Vancouver couple
November 7, 2017
Follow Ian Bailey on Twitter @ianabailey
Report an error Editorial code of conduct
Due to technical reasons, we have temporarily removed commenting from our articles. We hope to have this fixed soon. Thank you for your patience. If you are looking to give feedback on our new site, please send it along to feedback@globeandmail.com. If you want to write a letter to the editor, please forward to letters@globeandmail.com.
Comments are closed