Jen Heighton has her Burnaby elementary school classroom set up with 24 desks spaced one metre apart and expects to open all the windows all the time this school year.

Some days in June were so cold that she closed the windows to make it more comfortable for the five students who returned during the initial days of British Columbia’s cautious restart after the COVID-19 shutdown. But that’s not an option this week given the likely quintupling of her students, all of whom she’ll encourage to wear masks and – when the cool of fall arrives - plenty of layers.

“I’ll be letting students and parents know that they can wear jackets, toques, gloves and to wear lots of layers because it will be cold, but having some kind of air exchange will be safer for all of us,” said Ms. Heighton, who has been teaching for more than 20 years.

Still, she considers herself lucky compared to some colleagues trying to improve the ventilation in windowless or cramped classrooms.

B.C.’s education ministry announced on Thursday that Ottawa’s $242-million in extra school funding for the province will be divvied up among the districts based on enrollment numbers. The government said the money can be used to meet “local needs” such as improving ventilation systems, but is also to hire more teachers and staff, purchase textbooks and course materials, and to buy software and craft accessible systems for online learning.

Steve Rogak, who teaches mechanical engineering at the University of B.C. and has been studying aerosols for almost 40 years, said opening several windows will give the average classroom much more airflow than ramping up ventilation systems.

“The difference between ventilation indoors and outdoors is enormous: Imagine you go to the beach and you’re annoyed by people barbecuing something and making smoke, but imagine if that was happening indoors,” Dr. Rogak said.

Dr. Rogak said he approves of the provincial guidance offering school districts a base standard of filtration in HVAC systems, and that upgrading filters should not be too expensive. The current evidence, he added, shows very little risk the virus will spread from one room to another.

The most effective prevention tool is asking students to wear masks all the time, he said.

“Masks are so important,” he said. “They are protective against the smaller aerosols and the larger droplets.”

Teri Mooring, president of the BC Teachers’ Federation, called the province’s response inadequate in addressing the airflow concerns from her members at some of B.C.’s nearly 1,600 public schools. The province’s 60 school districts have been told to ensure their ventilation systems filter out a minimum level of airborne particles from classrooms.

“When we’re told ‘all those ventilation systems have been looked at and they’re all running properly’ we just aren’t confident in that assessment and we think more work needs to be done,” Ms. Mooring said.

She said a chief concern of teachers is that B.C. requires students to wear masks only in common areas like the hall or bus, not in class.

Reka Gustafson, B.C.’s Deputy Provincial Health Officer, said at a recent media briefing that masks “are quite low on the hierarchy of protections for COVID-19.” Dr. Gustafson said children are “not very efficient transmitters” of the virus, and keeping them interacting with only those inside their learning group adds an important layer of protection.

Ms. Mooring said grouping children within smaller clusters is important, but masking at all times is a more effective way to prevent transmission.

“We understand that learning groups are about contact tracing and not prevention,” she said.

Courtney Fleming praised the administration at her school for doing its best to find her a room to offer her dance course to Surrey high-school students. But, for now, her studio is in the cramped choir room with low ceilings and no outside windows, which makes it stuffy and hot when her class begins moving to bhangra – “a super high-energy aerobic dance with really heavy breathing.”

Ms. Fleming said most of her fellow dance teachers at Surrey’s 11 schools have similar setups. She will let her students dance outside as long as weather permits, then bring them in to study the theory and history of the art form. She plans to buy an air purifier and point a fan out of the room.

“It’s not what they signed up for, and it’s not what’s great about it,” she said.

Ontario will not loosen public health rules for another month as schools reopen: Elliott
September 8, 2020 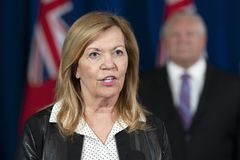 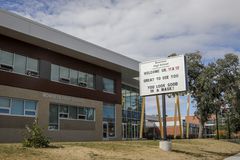 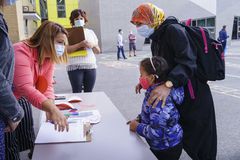