Strata councils and property managers are asking for special regulations to deal with COVID-19 outbreaks, a policy on masks and safety procedures after parties at two B.C. condo buildings over the past three weeks resulted in significant numbers of new infections.

“Nobody knows what to do when they discover an outbreak in their building,” said Tony Gioventu, executive director for the Condominium Home Owners Association of BC. Councils and managers are fearful of notifying residents because of worries about negative perceptions.

“If there were any market sales in that building, they’re pretty sure to dry up,” he said.

It’s unclear exactly what the rules are for sanitization procedures if there has been an outbreak in a building or even for simpler situations such as using pools, gyms and common areas.

Mr. Gioventu said a task force is working with the province to issue guidelines on three major issues – outbreaks, mask policy and pools – to give everyone guidance. More than 1.5 million people in B.C., out of a population of five million, live in strata-titled homes.

The trickiest issue for stratas is notification because of concerns about privacy and stigma, he said.

The proposed new rules would spell out that “residents will be notified of an outbreak and encouraged to increase all safety precautions when using common areas.” An owner held responsible for a major outbreak could be held financially responsible for the extra cleaning of common areas, which could run into the thousands of dollars.

“Right now, most [councils or property managers] are not notifying people,” Mr. Gioventu said. “But if 50 per cent of people in a building are retired and there’s an outbreak, should we be notifying them? I think we should.”

The province has had at least two “superspreader” events at condo buildings, one in Kelowna in early July and one in Vancouver on July 25, after people in large penthouse apartments played host to big parties.

In Kelowna, the apartment in question was a short-term vacation rental. In Vancouver, it was a resident owner who threw the party in a downtown building with about 200 apartment units in it overall.

In the Vancouver party, police were called by both people living in the building and in neighbouring buildings because of the noise and crowd of about 100. About 40 people tested positive for the coronavirus that causes COVID-19 after that event, along with three Vancouver police officers who had been sent to break up the party.

The property manager for the Vancouver building involved, whom The Globe and Mail has agreed not to identify because he is not authorized by the council to speak publicly, said that kind of event is hugely worrying and bound to happen at other buildings in the future.

“The industry right now is lacking in many guidelines. Nobody really knows what to do. And we’re lay people trying to make public-health decisions,” the manager said. “In my area, it’s terrifying for us that we could have another event like that. We’d like a hotline to call, like WorkSafeBC.”

He said he doesn’t understand why there are clear guidelines for workplaces about what to do and whom to notify in case of an infection outbreak, but nothing for multifamily buildings that can involve just as many people.

He was in touch with Vancouver Coastal Health to report on the event, to suggest that police officers who attended should be tested and to notify health authorities of the party host’s other activities in the building after the party but before self-isolation was required.

But, he said, he has no idea what happened with that information and whether the health authorities notified other residents of the building.

The guidelines being worked on with the provincial task force will also recommend that all residents, as well as people in delivery and trades, wear masks in common areas and that strata councils develop new rules for pools that spell out new, limited hours, new cleaning procedures and new restrictions on how many people can be there at once.

Mr. Gioventu said many stratas, including his own, are having a hard time with pools. Police had to be called recently when some residents had a late-night pool party, well past the new closing hour.

“They just decided the rules don’t apply to them and we ended up having a police incident there at 1 a.m.”

The new guidelines for strata owners will not apply to purpose-built apartments. David Hutniak, chief executive officer of Landlord BC, said members of his group have not said that a lack of guidelines is a problem for them, as they developed some from the beginning. 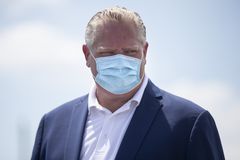 Opinion
With bars open, is it any surprise some people think house parties are okay?
July 27, 2020