An undercover RCMP investigation of a couple accused of plotting to bomb the B.C. Legislature was a “travesty of justice” and facilitated the crime, says a unanimous ruling by B.C.'s Appeal Court that upheld a judge’s decision to stay terrorism charges even though a jury found the pair guilty.

The Appeal Court decision in the case of John Nuttall and Amanda Korody of Surrey, B.C., also urges Parliament to overhaul anti-terrorism sections of the Criminal Code, saying they are “unnecessarily complex and cumbersome," and need to be comprehensible, for juries in particular.

In the ruling released on Wednesday, Appeal Court Justice Elizabeth Bennett noted the police were justified in beginning an investigation into the pair because of a “reasonable suspicion” they might commit a crime.

But during an operation that spanned six months of 2013, concluding with the couple’s arrest on July 1, Justice Bennett wrote officers crossed the line when they “pushed and pushed and pushed the two defendants to come up with a workable plan. The police did everything necessary to facilitate the plan. ...

“I can find no fault with the trial judge’s conclusion that police manufactured the crime that was committed and were the primary actors in its commission,” she wrote.

One of the charges against the couple was facilitating a terrorist action, but the appeal-court ruling noted that the Criminal Code needs to define this more clearly.

In a statement on Wednesday responding to the ruling, the RCMP said it respects the judicial process and judgment of the appeal court, and urges Canadians to be vigilant and report suspicious activities, but had no further comment.

The federal Public Prosecution Service of Canada said it has 60 days to decide whether to seek leave to appeal to the Supreme Court of Canada. Mr. Nuttall’s lawyer said the appeal court had delivered a “strong judgment” and that she saw no merit in such a legal option.

"But, of course, that’s for the Crown to decide,” Marilyn Sandford told a news conference in Vancouver alongside Ms. Korody’s lawyer, Scott Wright.

Ms. Sandford denounced the actions of police and the Crown in the case.

“One thing I think this judgment represents is a repudiation of American-style sting operations targeting vulnerable people,” she said.

“This operation was unique north of the border, but this style of operation of police-manufactured crime is very common now in the United States. What the judgment shows is we have a robust notion of entrapment in Canada, one that has been substantially eroded in the U.S. … and the courts are going to draw the line and have drawn the line.”

The couple became targets of an undercover RCMP investigation after police received information that Mr. Nuttall had openly endorsed violent jihadist views, according to Wednesday’s ruling.

A Surrey Mountie reported that a woman heard Mr. Nuttall on the street speaking on a cellular phone about “the afterlife” and “blowing up” Islamic countries, the ruling said.

The Canadian Security Intelligence Service sent letters to the RCMP Integrated National Security Team in 2013. One described Mr. Nuttall as a potential threat to national security, and the second reported Mr. Nuttall tried to buy potassium nitrate – a chemical used in explosives – from Lower Mainland pharmacies.

Mr. Nuttall, who had medical and mental-health issues as well as drug dependency, lived with Ms. Korody in a basement suite with his grandmother. They were unemployed and receiving social assistance, and rarely left a four-block radius.

The couple were arrested on Canada Day, 2013, after planting what they thought were pressure-cooker bombs at the legislature.

A jury found Mr. Nuttall and Ms. Korody guilty in 2015 of conspiring to commit murder and possessing an explosive in a public place on behalf of a terrorist group.

But the convictions were put on hold, and the B.C. Supreme Court trial judge ruled a year later that undercover police officers entrapped the pair using trickery, deceit and veiled threats.

In the appeal, the Crown argued that the couple developed and proceeded with the bombing plan and the RCMP operation was neither manipulative nor an abuse of process.

Ms. Sandford and Mr. Wright said their clients are relieved at the appeal court ruling, but keeping a low profile as they rebuild their lives after their legal ordeal. Ms. Sandford said the consequences of the case have been devastating.

“It’s not something that’s going to, even with the release of today’s judgment, be completely in the rear-view mirror," Mr. Wright said. "It’s going to be a long haul for them.”

With reports from Daniel Leblanc in Ottawa and The Canadian Press 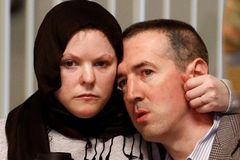