Erik Seiz has described this secluded enclave as being like Italy’s Amalfi Coast. The roughly 400 houses on Crescent Beach in Surrey, B.C., where Mr. Seiz has lived and run his software-technology business for 15 years, are backed by a dramatic cliff and face the ocean. House prices reflect those attractions, with current listings ranging from $1-million to $5-million.

But the community may cease to exist if Surrey carries through with a plan to cope with rising sea levels by becoming the first city in Canada to beat a “managed retreat.”

In plain language, that means buying up all the houses and allowing the area to revert to its natural state, so the only things to be swept away by rising water and frequent storm surges are dirt and vegetation.

“It’s not the preferred option of the people who live here,” said Mr. Seiz, who hopes the city will opt instead for some kind of barricade.

But buying everyone out may be the most logical move financially for the city, which is the province’s largest by territory and has the most land at risk. About 20 per cent of it lies below the high-tide mark along the ocean, while another 10 per cent along the Fraser River is vulnerable.

The managed retreat would be the biggest government buyout of housing ever, dwarfing the Alberta government’s purchase of 26 homes in the Calgary area after the 2013 floods.

Planners, engineers and climate scientists say managed retreat is increasingly being seen as a necessary and plausible strategy.

“When we look at a one-metre sea-level rise here, the emerging direction is to look toward retreat,” said Matt Osler, a senior project engineer with the City of Surrey who is overseeing the consultation on the city’s options, due to wrap up this year.

As expensive as the idea seems, Mr. Osler says buying up the homes on Crescent Beach would cost about as much as building a barrier.

Surrey has also put forward the idea of buying all the farms west of Highway 99 at its lowest points, moving the dike closer to the highway and allowing the land between the new dike and the ocean to become an intermittent flood zone.

Those are just two of the most dramatic ideas in a comprehensive plan the city is developing for sea-level rise – a plan that climate-change agencies say is one of the most ambitious in the province, if not the country.

“Surrey is one of the leaders, with its attention to detail, staff and resources,” said Steve Litke, a senior program manager with the Fraser River Basin Council, which is working with all Lower Mainland municipalities on plans for coping with climate change.

In B.C., sea-level planning was given a big push in recent years by provincial reports providing new numbers. A 2011 study said cities should plan for a rise of 50 centimetres by 2050, a metre by 2100 and two metres by 2200. And in 2012, a second report estimated that measures to adapt to sea-level rise would cost $9.4-billion, including $1.5-billion for property acquisition.

As a result, every community likely to be affected on the B.C. coast is trying to develop a plan.

Officials at the City of Vancouver have talked about requiring developers to raise the level of building sites near shorelines and about creating a barrier at the entrance to False Creek. The city is conducting a new round of consultations, with new options to be finalized in 2019, according to the city’s sustainability specialist, Angela Danyluk.

The City of Delta is also updating a previous plan, including a risk evaluation for all public utilities that might be damaged by floods and rising seas. It is also looking at how to phase in a height increase for all the dikes around its land. But so far there are no definitive plans for buying back any land.

“When it comes down to purchasing foreshore property, that hasn’t come up yet. We’re not into those levels of damages,” said Hugh Fraser, Delta’s acting director of engineering.

In Richmond, there’s less angst about rising seas. That’s because the municipality has been dealing with the issue since 1948, the year of the last big river flood.

“The things Surrey and Vancouver are doing now, we’ve been doing for the last 15 or 20 years,” said John Irving, the city’s general manager of engineering.

Richmond raises $10-million a year in taxes through a diking utility, which pays for constant upgrades and height increases to dikes.

For Steveston, the one-time Japanese fishing community at the mouth of the Fraser River’s south arm, the plan is to move the dike further out and possibly build a gateway to prevent the storm surges that come with rising seas.

But there’s no talk of moving Steveston businesses or homes away from the shore.

“It costs too much,” Mr. Irving said.

The question now is when the provincial and federal governments will start kicking in money for the very expensive but necessary changes.

Ottawa announced this month that it is creating a $2-billion fund to help cities with climate-change adaptation and mitigation. But that would not be nearly enough if buying up $5-million homes is part of the solution.

“The magnitude of dollars is enormous,” said Mr. Fraser in Delta. “We need to start thinking about how we’re going to fund this over the decades.”

For Port of Vancouver, underestimating Pacific sea-level rises could come at a high price
May 13, 2018 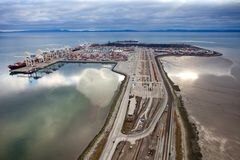