A lawyer representing five B.C. families trying to adopt children from Japan has obtained two legal opinions that maintain nothing in existing rules would prevent those parents from bringing their babies home as planned.

Despite those legal opinions being provided to both the B.C. and federal governments, the families are still waiting to find out whether new guidance provided by Japan to the United States will affect Canadian adoptions.

“We have been waiting since then,” he added.

Five B.C. couples who travelled to Tokyo in May with plans to bring home adopted babies have been caught up in uncertainty over a new directive from Japan to the U.S.

That hasn’t been part of the process for Canadian families adopting children in Japan. IRCC says it is currently seeking clarification from the Japanese government to ensure adoptions respect Japanese laws and British Columbia has temporarily suspended adoptions from Japan while it also seeks legal clarity on the issue.

Representatives from Saskatchewan, Manitoba and Alberta said those governments have not received applications for inter-country adoptions from Japan.

Canada is a signatory to the Hague Convention on the Protection of Children and Co-operation in Respect of Intercountry Adoption, a 1993 pact meant to ensure international adoptions are in children’s best interests.

Japan is not a signatory to the agreement, but adoptions of children from Japan to B.C. fall under B.C.’s Adoption Act and can be approved subject to its requirements.

And for at least a decade, B.C. families – including one couple now caught up in the delays – have adopted children from Japan.

“This has been especially confounding for my wife and I as we have already been through this process – having adopted our son in Japan two years ago,” Dan Armstrong said in an e-mail. “On that occasion, we were in [the] country for three weeks total. We have followed the exact same processes this time, with completely different results.”

Another family received a visa for their baby, only to have it revoked the next day.

One of the legal opinions obtained by Mr. Stojicevic is from a Japanese lawyer, Yasuyuki Muraoka, a family lawyer and former judge with the Yamaguchi Family Court in Japan.

In his opinion, a translated version of which was provided to The Globe, Mr. Muraoka says that, “we are writing to clarify that it is possible for a Japanese child to be transferred to prospective adoptive parents, based on the birth parent’s consent, and for the adoption to be successfully finalized in the Supreme Court of B.C.”

A second opinion, written by a B.C. lawyer, concluded “there is no requirement for a Japanese Court Order” to satisfy B.C.’s adoption laws.

A representative from the Japanese consulate was not immediately available for comment.

Janice Meyer, one of the parents who have been waiting in Tokyo, said she and her husband adopted from Japan because they were able to adopt a baby through arrangements with a birth mother and because the waiting period, at about two months after required screening and paperwork, was shorter than for other countries.

Ms. Meyer recently returned to Canada with twin six-year-old daughters so they could finish school, leaving her husband behind in Tokyo. 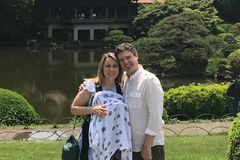