The B.C. government has suspended old-growth logging in the Fairy Creek watershed and in the nearby Central Walbran at the request of local Indigenous communities, seeking to quell a dispute that has led to months of civil disobedience and mass arrests by protesters who say they are protecting a rare ancient rainforest in a region where most valleys have been subject to clear-cuts.

Premier John Horgan announced the decision Wednesday, calling it a transformational moment for the forest industry as the province allows Indigenous communities to shape land use decisions. But between the two deferral zones on southern Vancouver Island, old-growth logging will continue – as will protests.

Mounties have made 185 arrests so far at B.C. old-growth logging protests

Fairy Creek blockade 2021: What you need to know about the anti-logging protest in B.C.

The two-year deferral is meant to give three First Nations time to develop their own resource plans related to old-growth forests. All three rely on forestry as an important source of revenue.

“We have allowed the title holders to make decisions on their lands,” Mr. Horgan told reporters. “We are embarking on the journey to transform forestry.”

The deferrals span roughly 2,000 hectares of land, as requested by the Huu-ay-aht, Ditidaht, and Pacheedaht First Nations. Those three communities have been thrust into the centre of the old-growth logging dispute as protesters blockaded a series of logging roads in and around Fairy Creek since last August. More than 190 people have been arrested since mid-May, after the B.C. Supreme Court granted an injunction against the blockades.

The three Nations, in a joint statement, welcomed the province’s decision. “We sincerely thank all those people and organizations who are supporting our rights and our responsibilities to decide what is best for our lands, our waters, our resources, and the well-being of present and future generations.”

The statement also said the Nations expect protesters not to interfere with logging in the areas outside of the two deferral zones while they develop their resource plans. “While this essential work is being carried out, we expect everyone to allow forestry operations approved by our Nations and the government of British Columbia in other parts of our territories to continue without interruption.”

The Rainforest Flying Squad, organizers of the blockades, have vowed not to stand down until a broader area they refer to as the Fairy Creek rainforest is protected. Saul Arbess, a spokesman for the group, said Wednesday that members will meet to discuss the deferrals before announcing a formal response. The group maintains they are acting in accordance with the wishes of elders and youth from the local Indigenous communities.

In the provincial election last October, Mr. Horgan promised to protect the province’s increasingly rare intact temperate rainforests, but the slow pace of reforms has fed the frustration expressed at the blockades.

The Premier said additional logging deferrals will be announced this summer, as part of his government’s commitment to a new old-growth strategy. Other Indigenous communities oppose old-growth logging and have asked for deferrals as well, but the Fairy Creek blockades – many taking place in Mr. Horgan’s constituency – have accelerated the process in this instance.

On June 1, the B.C. government announced a new forestry plan, proposing to double the amount of timber harvesting rights now held by Indigenous communities in the province. The policy change is designed to advance reconciliation by ensuring that First Nations see more benefits from the resources taken out of their traditional territories.

There are more than 5,300 Indigenous people directly employed in the forest industry in B.C., according to a 2019 study by the Council of Forest Industries, while business agreements and stewardship partnerships deliver about $250-million in economic benefits annually to Indigenous communities.

The logging companies with operations in the Walbran and Fairy Creek will not be eligible for compensation as a result of the temporary deferrals.

Babita Khunkhun, a spokesperson for Western Forest Products, said in a statement the company respects the rights and title of First Nations, including their right to economically benefit from the lands within their traditional territories. “We welcome and support the announcement today from the Huu-ay-aht, Pacheedaht and Ditidaht First Nations on their decision-making authority, integrated resource management planning process and focus on sustainable forest management.” 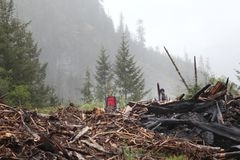 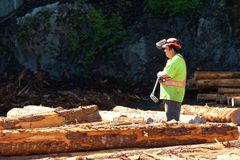