New data from British Columbia’s worker safety agency show the province’s elementary-school teachers have been approved for COVID-19 insurance claims at a higher rate than their counterparts at secondary schools, and teachers say the statistics are evidence that they are being infected at their workplace.

The head of the BC Teachers’ Federation, or BCTF, says the data bolster the union’s demand for a wider mask policy in elementary schools, where face coverings are currently not required.

She pointed out other possible factors, too, including the lack of physical distancing in elementary schools, whereas in some districts, some secondary schools have reduced their classroom density.

The data, updated by WorkSafeBC last Friday, show 265 claims related to COVID-19 exposure were submitted in the education sector. That follows the total number from the health care and social services industry, where more than 2,500 claims were filed.

The data say among 98 claims submitted by elementary-school and kindergarten teachers, 88 have been allowed. For secondary-school teachers, 35 claims were made and 26 were approved.

Provincial Health Officer Bonnie Henry, along with the Education Minister, have repeatedly rebuffed demands by the teachers to require masks in the lower grades. The ministry said in an e-mail Tuesday that while there are school exposures, the transmission rate inside schools remains low. This indicates its guidelines are working, the ministry said.

But Ms. Mooring at the BCTF said there has been no evidence provided to back that up. She urged the provincial government and provincial health office to share the data about transmission at schools with the union.

The ministry says mask policy at schools is based on Dr. Henry’s direction. However, at a briefing Monday, Dr. Henry indicated she provides advice and the ministry makes the decision.

“There are mask mandates in the public-health guidance and then each school district, each school, puts the operational pieces in place using those guidelines,” she said.

Education Minister Jennifer Whiteside said at the provincial legislature Tuesday that she has not reviewed the WorkSafeBC data yet. She said the ministry has been working with districts and health authorities to ensure schools are as safe as they can be.

B.C. has 35,149 full-time classroom teachers with about 60 per cent of those in elementary schools.

Last week, Surrey, B.C., schools brought in enhanced measures as the district has experienced more school-based exposures than any other district in the province, but a broader mask mandate in elementary schools is not among them. Laurie Larsen, chair of the Surrey Board of Education, said several exposures were “community acquired,” and have not resulted in school-based transmission.

Matthew Westphal, president of the Surrey Teachers Association, said it’s worth noting the two schools in the Surrey school district that closed because of outbreaks were both elementary schools.

“Elementary schools lack a basic layer of protection that is present in secondary schools, and we have not heard the public-health office provide a scientific explanation for why it is not following an approach to masks that has been implemented by public-health officials in other Canadian jurisdictions,” he said.

Union asks why junior school mask rule wouldn’t work in B.C. if it does elsewhere
February 26, 2021 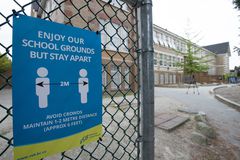 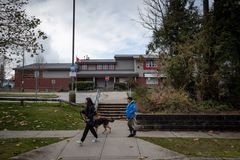