An employee with B.C.’s Gaming Policy and Enforcement Branch (GPEB) is under investigation for allegedly falsifying documentation to employ foreign workers at Vancouver’s Hastings Racecourse.

The issue came to light this week after officers with the Canadian Border Services Agency (CBSA) raided the East Vancouver racecourse on Monday, taking an estimated two dozen Mexican workers away in handcuffs.

At an Immigration and Refugee Board hearing on Wednesday, immigration lawyer Juliana Cliplef said her client, Brandon Carrion Gomez, a Mexican national, arrived in Vancouver on June 9 as a visitor and was told soon after that he could work legally at the racetrack.

Mr. Carrion Gomez registered with the GPEB and acquired a licence – mandatory steps for everyone working in B.C.'s horse-racing industry. He worked as a groom in the backstretch – the area opposite the homestretch, where the barns are located – five days a week, slept in an employee dwelling at the track and was paid $70 a day in cash.

On Wednesday, minister’s counsel Leanne Miller told the hearing that GPEB discovered that Mr. Carrion Gomez was allegedly working on a registration card that was originally issued to another person.

“It is suspected that the registration card … was photographed and being substituted by the GPEB inspector, who is under investigation,” she told the hearing. The employee in question has not been named publicly.

On Monday, CBSA officers, accompanied by GPEB employees, arrested Mr. Carrion Gomez and about two dozen others. Witnesses likened the action to the heavy-handed raids by U.S. Immigration and Customs Enforcement.

“People were arrested like they were taking down bank robbers,” said David Milburn, president of the Horsemen’s Benevolent and Protective Association of British Columbia.

In an interview with The Globe and Mail following his release, Mr. Carrion Gomez said he paid $1,000 for documentation that he believed to be legitimate. He said he knew of others who paid $700 or $750.

The B.C. government’s website states that processing fees for a licence to work in the horse-racing industry are $30 or $45.

Asked who he paid the money to, Mr. Carrion Gomez said it was the same person who issued his licence and registration.

“I thought it was legal,” he said.

The office of the attorney-general, responsible for GPEB, did not respond to requests for comment on Tuesday or Wednesday. The CBSA will confirm only that Monday’s arrests were part of an investigation related to the Immigration and Refugee Protection Act.

Backstretch workers are hired by horse trainers and are not employed by either Hastings Racecourse or its parent company, the Great Canadian Gaming Corp.

Another hearing on Wednesday heard that Javier Olalde Angel had worked legally as a groom at the track for several years, but did not have proper authorization this most recent time.

He is alleged to have paid $600 for documentation to work at the track this year, compared with $30 for the same documentation in previous years. At the racecourse, he was paid $1,100 every two weeks in cash. 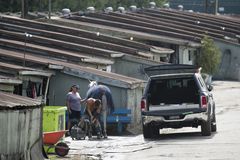