The B.C. NDP government expects Ottawa to honour a deal to pay the province up to $1-billion if the Trans Mountain pipeline expansion goes ahead – despite its continued opposition to the project.

In exchange, Ms. Clark’s government publicly confirmed that the project met its conditions for approval and committed to timely processing of permits throughout construction.

“The province is fully living up to its commitments under the agreement, and we expect that any future owner of the project would live up to theirs,” B.C. Attorney-General David Eby said on Wednesday.

Trans Mountain acknowledged in the agreement that none of the terms would prevent the province from changing direction on the project.

The future of the deal is uncertain after the federal government on Tuesday announced its intent to buy the Trans Mountain pipeline from Kinder Morgan for $4.5-billion to take over and complete the expansion for an unknown additional cost.

Opinion: When should the Canadian government get out of the pipeline business?

Weigh Anchor: Trans Mountain will increase oil tanker traffic off B.C.’s coast. The Globe follows a tanker from Burnaby to the open ocean

Ottawa said it had to step in on the project, which it deems to be in the national interest, after Kinder Morgan halted construction in April, saying the B.C. government’s opposition to the pipeline expansion had created intolerable risk.

Ottawa says it hopes to find a private-sector investor to take over, but it will complete the purchase by August if no other buyer is found. While the future ownership structure remains unclear, a spokesperson for Trans Mountain could only say on Wednesday, when asked what federal ownership of the pipeline would mean to the agreement, that the deal remains in force.

“All agreements we have in place continue,” Ali Hounsell, a spokesperson for Trans Mountain, said in a statement.

When Ms. Clark agreed to approve the project in exchange for a financial benefits pact, she called it “unprecedented.”

The revenue-sharing deal would oblige Trans Mountain to pay British Columbia a minimum of $25-million a year over 20 years once the project is in operation. If shipments exceed contract volumes, the payments could rise to a maximum of $50-million annually.

The BC Liberals lost power after the provincial election, and the NDP, which campaigned on a promise to use every legal tool available to stop the project, formed a minority government under John Horgan.

On the day Ms. Clark announced the deal, Mr. Horgan opposed it.

“Some risks are too great,” he told reporters as he brandished a jam jar filled with heavy oil. “This is the risk Christy Clark is prepared to take with our natural environment. … Some messes cannot be cleaned up.”

Now that Mr. Horgan is Premier, his government has walked a fine line between opposing the pipeline and living up to its legal obligations.

His government says it continues to meet the terms of the agreement, which calls for a project office and manager to work with agencies to ensure timely processing of permits related to the project. The province has been issuing regular updates to demonstrate that it is continuing to fulfill its contractual obligations, and to avoid being accused of trying to thwart federal jurisdiction over interprovincial pipelines.

The province says Kinder Morgan Canada has submitted 756 permit applications and 220 of those have been approved and permits issued. The rest are under review. Another 435 permits have yet to be submitted.

Environment Minister George Heyman said the permit applications have slowed since Kinder Morgan suspended all but non-essential construction in early April. “But we are treating them as we always have.”

With Ottawa’s purchase of Trans Mountain, Trudeau goes from environmental ally to protest target
May 29, 2018 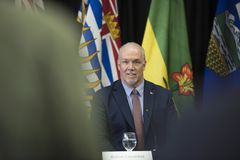 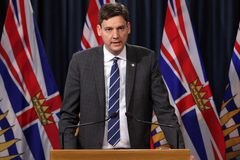