In Grade 12, Sonia Furstenau was told by her teacher that she couldn’t do math. Insulted, she picked up her textbook and taught herself the whole course from the beginning. She got 98 per cent on her math final.

“I think I did it almost out of spite. … I was going to show [the teacher] that he was wrong," she says.

Being told she can’t do something has come in handy in her political life. It prompted her to become an environmental activist in British Columbia’s Cowichan Valley and fight a difficult cause. It carried her through the 2017 provincial election, when she joined a tiny BC Green Party caucus of three after having won her seat by just a margin of 6.1 per cent over the New Democratic candidate.

Eager to imprint: BC Liberal Leader Andrew Wilkinson strives to make his mark

A calculated risk: NDP Leader John Horgan on his decision for a snap election in B.C. and the rough road that could lie ahead

And she’s drawn strength from that same refusal to back down during the current election campaign that was called unexpectedly in September just a week after she became the Green Leader. She had taken over from the retiring Andrew Weaver, an internationally known climate scientist who was synonymous with the party after the Greens' breakthrough agreement to help the NDP form government in 2017.

Ms. Furstenau said she aims to lead her party differently than Mr. Weaver. Besides focusing on climate action and the environment, Ms. Furstenau said she wants the party to pay as much attention to people and their well-being, and on inequality, especially poverty in children and in First Nations.

“Inequality is one of the most destabilizing conditions that you can have in a society," she said in an interview. "And I think that we have to be very serious about addressing the growing inequality that we have in B.C.”

Ms. Furstenau, 50, was born in Edmonton, where her parents moved for the pursuit of her father’s graduate studies. She attributed her determination and persistence partly to her upbringing: “My parents really instilled in me that I could do and achieve anything if I was willing to work hard.”

Her father, an immigrant from Germany in the 1950s, taught himself English, earned a doctoral degree and became a professor of psychology. Her mother, who was born in Comox, B.C., comes from a family of teachers. Education was always highly valued in her house and family, she said.

Ms. Furstenau said her experiences in middle-distance running, in her adolescent years, also helped shape who she is. She started running when she was 12, and was a nationally ranked 800-metre runner for several years, competing at track meets across the Prairies.

At 20, after travelling in Europe and Australia, she packed up her Toyota Tercel with everything she owned and drove to the West Coast, where she had spent almost every summer with her mother’s side of the family since she was a child. In 2001, when she was enrolled in a master’s program in history at the University of Victoria, she knew she was never going back to the Prairies.

Ms. Furstenau had been working as a teacher, and politics had not been on her radar. But in 2013, she got involved in a fight against a provincial permit that allowed a company to store contaminated soil above Shawnigan Lake. The lake provides drinking water to thousands of people in her community. To become a more effective voice on this issue, she ran and won an election to become the local director with the Cowichan Valley Regional District in 2014.

Mary Polak, then B.C.'s environment minister, said although she and Ms. Furstenau were in different positions on the Shawnigan Lake controversy, she found Ms. Furstenau a passionate advocate and someone who was straightforward and didn’t play games.

After four years of battling, the permit was revoked in 2017. In the same year, she was elected as an MLA for the BC Greens in Cowichan Valley, a long-time New Democrat stronghold.

Ever since her constituency office opened in the Cowichan Valley, which runs from Nanaimo to near Victoria, Ms. Furstenau, a mother of three children and two stepchildren, said she kept hearing stories from parents that their children had been removed from them. The region has twice the rate of children in provincial care compared with the B.C. average (7.7 children for every 1,000). At last count, 78 per cent of youth in care in the region were Indigenous.

Patricia Dawn, founder of Red Willow Womyn’s Society, an Indigenous group that advocates for parents and educates them on their rights, has been working with Ms. Furstenau on the issue for years.

The Greens have fielded 74 candidates in Saturday’s provincial election, fewer than the 83 in 2017. Ms. Furstenau said she is proud of this slate of young and diverse candidates, but among the team, just 18 per cent are persons of colour. The NDP has fielded a slate with 25 per cent of candidates who are people of colour.

Ms. Furstenau also has her own challenges. She is in a tight race and the NDP, the party with which the Greens recently worked side by side, have a two-term area councillor running against her in Cowichan Valley. Both provincial NDP Leader John Horgan and federal NDP Leader Jagmeet Singh have visited the riding. Mr. Weaver has not been lending her his support and his staff declined an interview request on behalf of him when asked about Ms. Furstenau.

She admitted the campaign is starting to leave her feeling tired.

Before the election was called, she was able to find meditation and relaxation in, among other things, her knitting. In the past few months, she said, she knitted tiny doll versions of the people she loves. They include her stepdaughter and one of Adam Olsen, the third member of the Green caucus.

She has not knit one of Mr. Weaver. 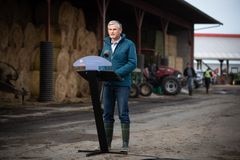 Explainer
The B.C. election is Oct. 24. Here’s where the Greens, Liberals and NDP stand on the issues
October 21, 2020 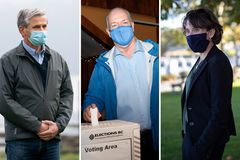 A calculated risk: NDP Leader John Horgan on his decision for a snap election in B.C. and the rough road that could lie ahead
October 22, 2020 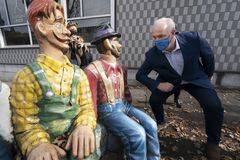