A B.C. hospice society that refuses to provide medical assistance in dying at its facility in violation of local rules has been given until Thursday to submit plans for compliance.

Health Minister Adrian Dix said the Delta Hospice Society, which operates the Irene Thomas Hospice in Ladner, may face penalties if it fails to do so.

Fraser Health’s policy on medical assistance in dying (MAID) sets out expectations for addressing a capable patient’s request for information about the end-of-life procedure, and connections to providers. Individuals and faith-based organizations can choose not to participate in medically assisted deaths, but still must facilitate connections.

The policy came into effect in September, 2016, and covers all facilities Fraser Health owns or operates.

The society’s founder and executive director, Nancy Macey, refused, saying that patients at the Irene Thomas Hospice who wanted MAID would have to be transferred to another facility. In September, 2019, the society’s board of directors dismissed Ms. Macey and voted to allow medically assisted dying. The decision to allow MAID was reversed after an annual general meeting in November in which proponents of performing the procedure were ousted from the board.

The hospice is not faith-based.

Fraser Health representatives met with hospice leaders on Dec. 5 “to discuss concerns we have regarding compliance with their contract,” spokeswoman Tasleem Juma said in a statement. “Fraser Health subsequently provided [the leadership] with formal notice of the concerns.”

According to the hospice’s most recent annual report, Fraser Health is by far its biggest funder, contributing about $1.5-million of $3-million for the fiscal year ending March 31, 2018.

The Delta Hospice Society did not return a call requesting comment on Wednesday.

Doug Mather, who was voted out as a director at the November annual general meeting, welcomed the news that Fraser Health appeared prepared to force the issue but said he wished it had happened sooner.

“As a board, we were hoping that at some point, Fraser Health as the major funder would force their [the hospice’s] hand, but they never did,” Mr. Mather said on Wednesday. “So now it sounds like they are finally weighing in.”

Mr. Mather said he and other former board members tried for two years leading up to the AGM to have the service provided at the hospice.

In an interview with The B.C. Catholic, a weekly newsletter posted online, in February, 2017, Ms. Macey said hospices should be able to opt out.

“Those who choose to have [medical assistance in dying] represent one per cent of the population,” she said. “The euthanasia people have choice anywhere they want it. Where does the choice come for the people who don’t want to be in an environment with euthanasia?”

Mr. Dix said the society is obligated to follow the rules while it receives public funds.

“And, of course, we do live in a free society,” the Health Minister said. “Delta Hospice Society can decide that it doesn’t want to continue to receive support from the Fraser Health Authority in its mission. They can choose to do that. You can absolutely have it your way. But you can’t have it both ways.”

B.C. raises payments to doctors who provide medical assistance in dying
May 18, 2018 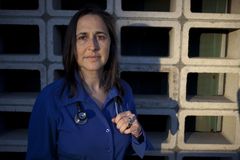