Construction delays and rising costs on British Columbia’s Site C dam project are being blamed on the impact of the pandemic, but it’s prompted the provincial government to appoint an adviser to look over the operation.

Energy Minister Bruce Ralston said Friday he’s concerned by the news and will await a revised budget from BC Hydro, the Crown utility building the dam, and the independent analysis from former deputy finance minister Peter Milburn.

“I think we can all appreciate COVID-19 has created challenges none of us could have foreseen months ago,” Ralston said at a news conference. “These reports provide a first glimpse into how COVID-19 has caused uncertainty with the project’s schedule and added cost pressures to its budget.”

Site C’s budget in April 2018 was estimated at $10.7 billion, including reserve and contingency funds of about $1.5 billion. Construction started in summer 2015 and the dam’s power generators were scheduled to be on line in 2024, with a 2025 completion date.

However, BC Hydro president Chris O’Riley said in a quarterly update submitted to the B.C. Utilities Commission that the pandemic has resulted in safety, cost and scheduling issues for the project in northeast B.C.

The update, covering the period from Jan. 1, 2020 to March 31, doesn’t include a revised cost estimate or completion date.

“There is uncertainty with the project’s schedule and in-service date. As the evolution of the COVID-19 pandemic is uncertain and the date of resolution is unknown, various cost and schedule impact scenarios continue to be assessed and refined,” said O’Riley’s in his update to the utilities commission.

The impact of the pandemic has not resulted in the delay of one the dam’s major construction milestones, the diversion of the Peace River, which is set to occur later this year, he said.

Ralston said Hydro is in the process of reviewing Site C’s costs and timelines.

Milburn, a former B.C. government bureaucrat with a background in civil engineering, will also provide an assessment of Site C to the province by the fall, said Ralston.

“He will bring a fresh set of eyes and an independent perspective, which I look forward to receiving and see where that takes us,” Ralston said.

“I’m not sure that that’s a realistic alternative, but I’ll await the advice of Mr. Milburn,” Ralston said.

He said the former B.C. Liberal government led by Christy Clark approved Site C in 2014 and embarked on a construction schedule to bring the dam to " the point of no return.”

Premier John Horgan announced in December 2017 that his government would support completion of the project, but he said the New Democrats would never have started Site C and the decision to carry on caused intense debate within his cabinet and caucus.

The project has been at the centre of a polarized debate between politicians, environmentalists, First Nations, labour groups and landowners in the Peace River Valley for decades.

“Today’s shocking Site C announcement is a classic example of NDP mismanagement and their lack of leadership on important files,” said Greg Kyllo, B.C. Liberals Hydro critic in a statement, adding Site C was on time and budget in 2017 when the New Democrats became government.

B.C.‘s Greens say the government must review the future of Site C.

“This project should not be given a blank cheque to proceed at any cost imaginable,” said interim Green Leader Adam Olsen in a statement. “The NDP should seriously consider cancelling Site C. The NDP needs to be clear about the price and make a decision before river diversion takes place and we change the flow of the Peace River forever.”

Site C will be the third dam and hydroelectric generating station on the Peace River and will provide enough energy to power the equivalent of about 450,000 homes per year in B.C. 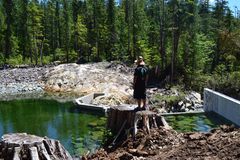