Associate Chief Justice Heather Holmes said Thursday that some questions asked by border officials involved topics that her lawyers say were relevant to an investigation in the United States, but the exam was hardly “grilling.”

She posed the question during a hearing called to determine if Meng was subjected to an abuse of process during her arrest. If proven, Meng’s lawyers say it should prompt a stay in the extradition case.

Meng is wanted on fraud charges in the United States. Both she and Huawei deny the allegations.

Meng’s team accuses Canadian and American officials of co-ordinating the collection of evidence for the U.S. fraud case against her under the guise of a routine border exam.

“If this was all as you’re suggesting, would the officers not have done a more concerted job of questioning Ms. Meng?” Holmes asked. “There were a few questions touching on the topics you’ve outlined, but it’s not exactly a grilling examination or even a very vigorous one or detailed.”

Tony Paisana, one of Meng’s lawyers, replied that in the course of his criminal defence career, he has sometimes asked himself, “Surely my client isn’t that dumb,” but that’s the first and most obvious answer.

“The fact that they didn’t do a great job of violating her rights doesn’t mean they didn’t violate her rights,” he said of Canadian officials.

It’s likely they asked questions in a “roundabout” way because they didn’t want to tip her off to their true intentions, he said.

The true purpose of the covert probe may well have been to obtain passcodes for Meng’s electronic devices for the Federal Bureau of Investigation, he added.

Officials with the RCMP and Canada Border Services Agency denied that they abused their powers during an evidence-gathering hearing in autumn.

The court has heard that Meng was held by border officers for three hours before she was arrested and informed of her rights, but Meng’s team has largely focused on the final seven minutes, when a border officer asked about Huawei’s activity in Iran.

Paisana said there was no reason Canadian border officers should have been concerned about Iran. Canada does not have sanctions against the country and the officer professed to be concerned about national security, he said.

“Why not ask about her products in Canada? Why was he focused exclusively on sales of telecom products in Iran?” Paisana said.

Meng is accused in the United States of misleading HSBC to believe Huawei no longer had control over technology company Skycom, putting the bank at risk of violating U.S. sanctions against Iran.

Her team claimed border officers acted outside of their statutory authority when they seized Meng’s devices.

Paisana also accused a border officer of lying to the court.

CBSA officer Scott Kirkland testified that he had a “heart-wrenching” realization that he had accidentally given passcodes to Meng’s devices to RCMP in the pile of her electronics.

Paisana called that a “complete fabrication,” and pointed to contrary testimony from an RCMP officer who said he took the devices from a desk and Kirkland handed him the paper.

Kovrig and Spavor were arrested in 2018, days after Meng, and their detention is widely seen as retaliation.

Global Affairs Canada only learned Wednesday that Spavor’s court hearing would proceed on Friday, one day after closely watched high-level meetings between U.S. and Chinese officials in Alaska.

A hearing for Kovrig, a former Canadian diplomat, has been scheduled for Monday.

China’s Foreign Ministry denied any wrongdoing Thursday, attributing the timing of their trials to little more than coincidence.

Spokesman Zhao Lijian told media the cases have been handled “in accordance with the law.” 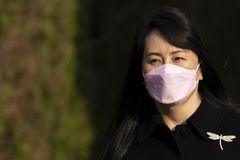 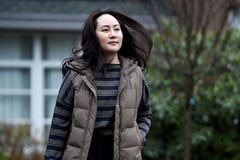 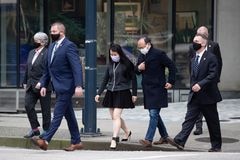