The production of Hollywood-driven TV programs and feature films has soared in British Columbia, making the province a Canadian leader in the multibillion-dollar industry, according to a new study.

Foreign location and service production increased 31.5 per cent, to $3.04-billion, in fiscal 2017-18 from the previous year, putting the province far out in front of second-place Ontario, which saw an increase of 3.2 per cent, to $910-million.

There is $8.9-billion in total film and television production a year in Canada, creating 179,000 jobs, according to the study released Thursday by the Canadian Media Producers Association.

British Columbia now accounts for 40 per cent of Canadian film and television production, followed by Ontario at 32 per cent and Quebec with 20 per cent, according to the study, entitled Profile 2018.

The study notes that the expansion in B.C. has been driven by the programming needs of streaming platforms such as Amazon, Netflix and Hulu.

The production roster of the B.C. agency that supports the sector listed on Thursday 44 TV series, feature films, TV movies and new-media or streaming series. They include such shows as Riverdale, Batwoman, The Lost Boys – a series based on the 1987 feature film; The Haunting of Nancy Drew and such streaming series as Altered Carbon, for Netflix; and the new Apple-platform series See, starring Jason Momoa, who recently featured as Aquaman in the successful feature film of the same name.

Andrew Addison, a spokesman for the association, said B.C.'s appeal has been “decades in the making” as producers have discovered the province’s natural beauty and urban settings, production infrastructure and well-trained crews.

But Mr. Addison said it’s far from clear whether it’s all sustainable.

“The fundamentals that drive it are there. Because of the work force, because of the infrastructure, I think there’s a strong foundation that will reinforce a healthy sector into the future,” he said in an interview from Toronto.

David Shepheard, the Vancouver film commissioner, said other positives for B.C. have included a synergy that has developed with Hollywood, which is in the same time zone.

Mr. Shepheard said the growth in the demand for content is part of a global appetite for more quality programs, financed by streaming services with money to spend. Demand is “just amazingly high at the moment," he said.

Future trends are less clear. “At the very minimum, we see it staying stable for the next year – the level of production and demand,” he said.

There have been strains placed on existing infrastructure, such as soundstages and crews, but in response the industry has financed expansion: “The infrastructure grows as business grows.”

Mr. Shepheard noted that B.C’s visual-effects industry has risen to about $1-billion in spending a year as studios service both productions shot in Vancouver as well as productions shot elsewhere.

But the study also found that B.C. lags in the production of Canadian-made content.

Forty-five per cent of Canadian TV production is done in Ontario and 28 per cent in Quebec, while only 16 per cent is done in B.C. The province ranks third, at 4 per cent, in Canadian theatrical feature-film production. Ontario is first, at 48 per cent, and Quebec is second, at 45 per cent.

Mr. Shepheard said he’d like Vancouver to appear as itself more often in film and TV. “That’s a constant wish of ours to get more of that,” he said. 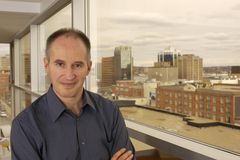 Beyond traditional TV and radio: CBC grapples with a digital future Subscriber content