In British Columbia’s Nahmint Valley, an 11th-hour reprieve was issued this week for ancient forests that were slated for logging.

The valley, in central Vancouver Island, features massive old western redcedars and some of the province’s largest Douglas fir trees, and is home to Roosevelt elk, black-tailed deer, cougars, wolves, black bears and threatened species such as the marbled murrelet and northern goshawk. It has been at the centre of a long-running battle between environmental values and economic ones, as the provincial government’s own logging agency, BC Timber Sales (BCTS), oversees the falling of large chunks of the forest.

Across B.C., a total of 2.6 million hectares of rare, old-growth forests may be spared further logging under the provincial government’s new approach to forestry, which recognizes that these ecosystems are irreplaceable. On Nov. 2, Forests Minister Katrine Conroy announced the province’s largest-ever commitment to preservation. The first step is to suspend logging in one-third of the rare, old-growth forests, which are considered at a very high risk of irreversible biodiversity loss. The measures are temporary, but intended to allow time for the government to fully develop its plan, which will make the health of British Columbia’s forests an overarching priority.

There is a catch: Most of the proposed logging moratoriums are subject to what may be lengthy consultations with Indigenous communities. But the province has immediately put the brakes on new logging through BCTS, which accounts for one-fifth of all of B.C.’s annual forestry harvest. For the bulk of the proposed deferrals, the province will make no changes until it conducts individual consultations with 204 First Nations, a process that, optimistically, the province hopes to complete in 30 days.

Meanwhile, B.C. will continue to harvest trees in old-growth forests, some essentially undisturbed since the last ice age, as part of an industry that still contributes mightily to the provincial coffers.

TJ Watt has spent years bushwhacking through the Nahmint Valley for the non-profit Ancient Forest Alliance, documenting both the old-growth giants and the logging that targets the biggest and most valuable stands of trees. Since the announcement on Tuesday, he has been studying the deferral maps to see what the changes mean.

“We’ve documented some of the earth’s largest trees being cut down there by BC Timber Sales, and we’ve continued to highlight the forest that remains at risk in that valley. And today, I’m excited to look at these maps and see that there is a real change coming,” he said. 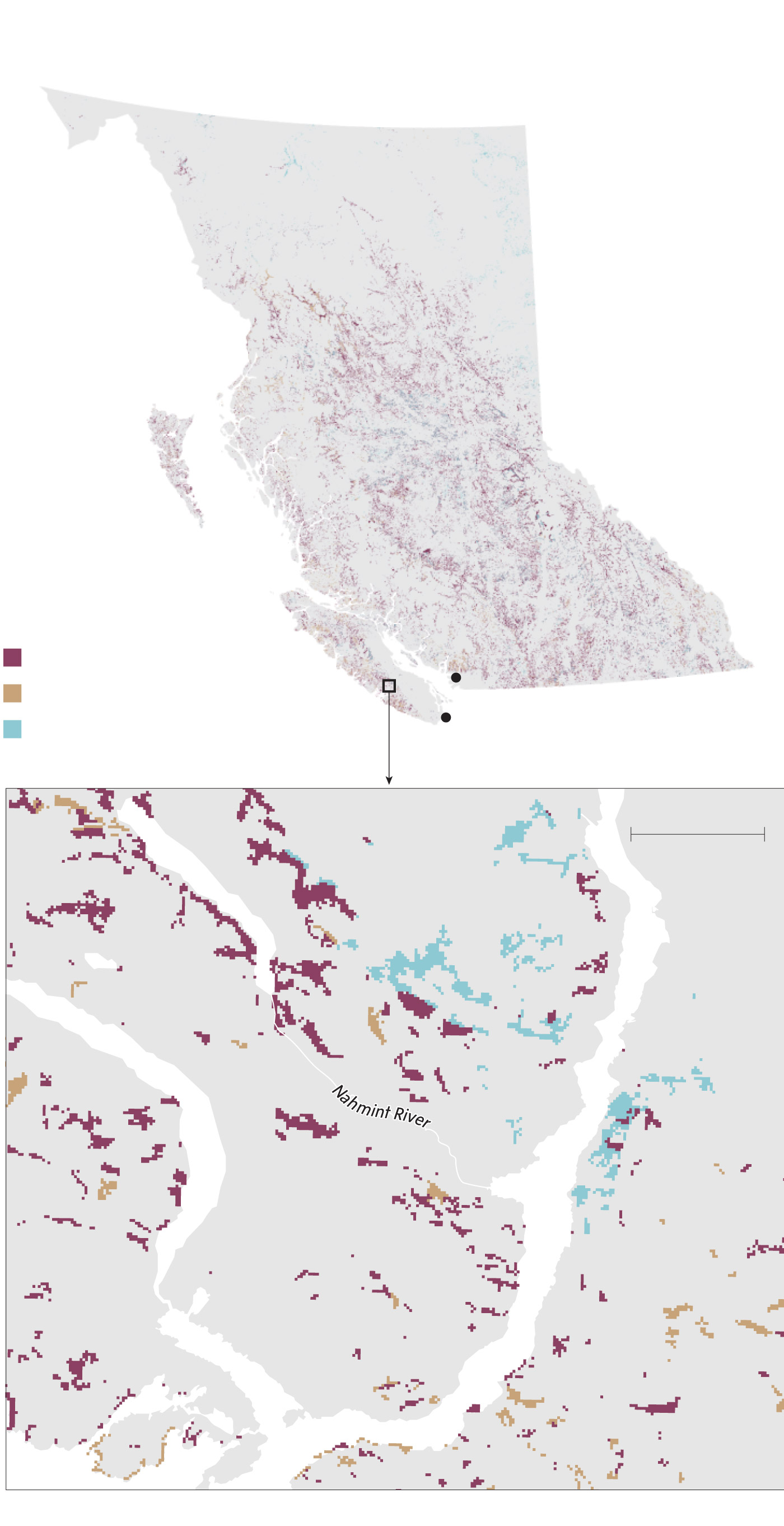 The valley has been heavily logged, same as the surrounding region. The nearest town is Port Alberni, a forestry-dependent community where the first commercial sawmill opened in 1860.

The San Group opened a $70-million sawmill in Port Alberni in 2020, the first major investment in coastal sawmilling in 15 years. Kamal Sanghera, the chief executive officer, said his company’s five mills are already struggling to obtain raw materials to process, but if halting BCTS operations in places such as the Nahmint Valley leads to reforms of the system, he can support the changes.

“We need to cut less and create more value,” Mr. Sanghera said in an interview Friday. “The system now is wrong. We are shipping raw logs overseas, while guys like us can’t get supply.”

Conflict over old-growth forestry is a familiar story in B.C., which was described internationally as the “Brazil of the North” 30 years ago. In 1992, the provincial government appointed an independent Commissioner of Resources and Environment in a bid to resolve these conflicts with a consensus-based land use strategy. Consensus remains elusive, and while the industry has changed, timber harvesting remains entrenched as a priority over values such as biodiversity.

One factor has changed significantly. In 1992, Indigenous communities struggled to influence land-use decisions in their traditional territories. Today, the B.C. government is bound by legislation to seek consent before making new decisions about resource development.

The First Nations Leadership Council, in a statement Thursday, welcomed the deferrals but criticized the delivery, noting that some old growth remains unprotected while the consultations are carried out. As well, the council is unhappy that the province has passed responsibility to First Nations without providing financial support to replace any revenues that might be lost if they choose to defer logging old growth in their territory.

Ms. Conroy would not say whether her government is ready to offer compensation to First Nations that wish to approve deferrals. “We will work with the communities,” she said in an interview.

The government is also under fire from the forest industry, which predicts devastating consequences for jobs and communities if the deferrals are approved.

Susan Yurkovich, president and chief executive officer of the Council of Forest Industries, is shocked by the scale of the deferrals. To freeze 2.6 million hectares of old-growth forests equals an annual loss of 10 million cubic metres of timber, she said. Based on the average requirement to feed a sawmill, that would shut down up to 20 mills, and cost 18,000 jobs, she added.

The provincial government insists that the toll will be smaller: If all of the proposed deferrals go ahead, 4,500 forestry workers would be out of a job. The transition that the B.C. government envisions would see the forest industry extract more product, more value and more jobs out of every tree cut. But that, Ms. Yurkovich said, would require significant investments.

“To retool a mill takes millions and millions of dollars,” she said, “What is going to get people to invest is predictable access to fibre at a reasonable cost. And this announcement has created significant additional uncertainty. It is going to have a chilling effect not only for industry, but for workers.”

The bulk of the trees that are cut in B.C. are on Crown land, meaning that forestry companies depend on the province for their fibre supply. That is the provincial government’s bargaining chip.

“This is a new vision for how we’re going to do forestry in this province. We have to look at the whole picture, the whole ecosystem. It’s not just about looking at that tree and saying, ‘Okay, how much do I get for that when we harvest it?’” Ms. Conroy said. “Some companies have adjusted and some haven’t. If you’re going to harvest our timber in B.C. and reap the benefits of that, then we hope you will invest in B.C. They are the peoples’ forests.”

Although many communities around the province still depend on forestry, the industry’s clout has waned. In 1992, the industry provided more than 90,000 jobs; today there are about 50,000. Mills have closed around the province even as the trees continue to fall. In the past year, B.C. has shipped $500 million worth of raw logs overseas to be processed in other countries. Nation-wide, only Alberta gets fewer jobs out of every tree cut.

As the most valuable, old-growth forests disappear, experts warn that job losses, with or without this action, are looming.

Ecologist Rachel Holt is one of the experts the province retained to produce its 2.6-million-hectare deferral plan. “We know that the old growth is running out. In some places, it’s already gone, like the dry coastal Douglas fir forests on the east side of Vancouver Island. We couldn’t set deferrals, because there is no old growth left. And what has industry done to prepare for this? Where was the forward planning to make sure there wasn’t community disaster?”

Environmentalists have accused the B.C. NDP government of dragging its heels on action, but there is a sense of urgency now on display. That is partly due to domestic pressure: The mass civil disobedience that continues in Fairy Creek has put a spotlight on old-growth logging. It’s also international, as Canada makes bigger and broader commitments to conservation and climate change.

But most of the promises made this week depend on the work ahead, as the province seeks to execute what it has billed as unprecedented conservation.

First Nations, industry leaders and environmentalists all agree on one thing: This transition cannot be achieved without a significant amount of money.

“If the government wants to set themselves up for success here, they absolutely need to come to the table with hundreds of millions of dollars in conservation funding,” Mr. Watts said. “Primarily for the economic relief of First Nations communities, if they choose to defer and ultimately move to permanent protection, so that it’s not a choice between logging and making money, and protecting forests and losing money. It needs to be a fair and equitable choice.”

B.C. Forest Practices Board chair says proposed changes to forestry policy ‘a start’
October 21, 2021
Independent panel to advise B.C. on management of its old-growth forests
June 24, 2021
opinion
Back to the blockades: Why I continue to fight for British Columbia’s old-growth forests
May 21, 2021