The mayor of a Vancouver Island community where two inmates are accused of murdering a man after they escaped from a minimum-security prison says they never should have been there in the first place.

John Ranns says he’s warning people in Metchosin to stay vigilant as long as there’s a loophole allowing inmates to be transferred to low-security facilities through an override of their security classification when they still pose a risk.

“The wrong people got sent,” Ranns said in an interview.

The RCMP said on Friday that James Busch and Zachary Armitage have been charged with first-degree murder in the death of Martin Payne, whose body was found in his home on July 12 last year.

Police were alerted on July 8, 2019, that the two men had escaped from the minimum security William Head Institution outside Victoria. An off-duty officer spotted the men while walking his dog almost two days later, leading to their arrest.

It was only when Payne, who was 60, failed to show up for work that officers found his body days later.

Busch, 42, was serving an indeterminate sentence for second-degree murder and assault. Armitage, 30, was convicted of offences including a violent aggravated assault and violent robbery.

In a sentencing decision on Nov. 18, 2019, for Armitage on a charge of escaping lawful custody, provincial court Judge Roger Cutler says he had served eight years of a 14-year sentence when he fled the prison.

On July 7, during a walk by the water, the two prisoners decided to escape by walking along the shoreline of the oceanfront facility during low tide, the decision says.

“Given (Armitage’s) prior violent record and his history of escaping lawful custody, including four prior convictions, I was perplexed as to why at the time of his escape the offender was serving his sentence at a minimum-security institution,” Cutler writes in the decision.

“This situation was particularly troubling as the information provided to the court indicated that the offender had recently escaped in 2016 and less than two years later, in February 2018, he had been assessed as a medium security or moderate risk to escape on the security reclassification scale.”

However, a week after the assessment, it was overridden to minimum security, the decision says. Two months after that, Armitage was transferred to William Head.

Cutler says he reviewed an internal Correctional Service Canada report provided by the Crown recommending the override because Armitage had made positive efforts and progress to rehabilitate himself. His case management team did not believe he posed a risk of escape, Cutler says.

The escape is understandably disconcerting to the public, the judge adds.

“The public is entitled to expect that those incarcerated for violent criminal conduct and who have an extensive and recent escape history are rarely, and only with solid reasoning, placed in a position where escaping incarceration may be achieved by merely walking along the shoreline at low tide,” he says.

“And, when such an escape occurs, the public ought to be provided a full explanation of the process leading to the decisions made by those responsible.”

Cutler added one year to Armitage’s sentence for the escape, but at the time of sentencing the Crown had not alleged he committed any offences while at large.

On Saturday, commissioner Anne Kelly of the Correctional Service said an investigation was started on how to prevent and respond to escapes, and measures have been taken to enhance security.

A written statement said escapes from federal prisons are uncommon, with nine across Canada in 2019-20. The last one at William Head was in 2014 and before that in 2004.

The Correctional Service said in a statement Tuesday the investigation is in its final stages and all minimum-security inmates have had their security levels reviewed.

Policy changes include mandatory psychological risk assessments for specific inmates before they’re assigned to a minimum-security prison and higher decision making authority for their reclassification.

The assistant deputy commissioner is now the final decision maker for the reclassification of any inmate convicted of a sex-related offence, or who was initially rated maximum security and who committed an offence causing death or serious harm and has three or more years before they are eligible to apply for day parole.

The assistant commissioner of correctional operations and programs, and the deputy commissioner for women remain the final decision makers for the reclassification of a dangerous offender to minimum security.

Ranns said when Armitage was transferred, the minimum security warden had no say and that under the changes, that remains the same.

The Correctional Service did not immediately respond when asked for confirmation of Ranns understanding of the transfer, and the William Head warden could not be reached for comment.

“It just makes sense to me that the warden who understands that program the best and understands the community the best doesn’t get a chance to refuse an inmate,” Ranns said.

“While a lot of positive changes were made, the major factor hasn’t been addressed and that is: those guys should not have been there in the first place.”

Ranns said William Head has been a “very good corporate citizen” and communicates well with the community.

The prison has a strong program for preparing inmates to reintegrate into society in the final months before their release, Ranns said. They live in housing units together, cook for themselves, do their own laundry and participate in work programs in the community.

Sooner or later, almost every inmate is released from prison and they need to have the life skills to contribute to society, Ranns said.

“It’s a very good program with very good results. The problem is, how did (Armitage and Busch) get there,” he said. 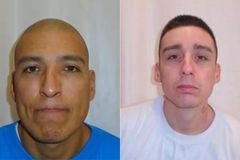