The father of a British Columbia murder suspect has written a book that sheds new light on his mental health, explains harassment convictions involving his ex-wife and provides greater insight into the possible impacts the events had on his fugitive son.

Alan Schmegelsky, the father of 18-year-old Bryer Schmegelsky, sent a book to reporters this week titled “Red Flagged,” which he says is a novelization of actual events and fictionalizes some incidents.

Bryer Schmegelsky is a suspect in three murders in northern B.C. along with his friend, 19-year-old Kam McLeod, and RCMP are continuing to search a boggy, remote area in Manitoba where they were last seen.

The 132-page book, which Alan Schmegelsky said he planned to self-publish this week but now does not intend to publish for sale, reveals new details of his troubled life and his numerous encounters with police and courts.

He said he sent the book to reporters to highlight how a “broken system” has shaped him and his son.

“My son and I have been treated like footballs. It’s time for some truth,” he said.

He writes that he was arrested by Victoria police on Aug. 4, 2008, his son Bryer’s eighth birthday, three years after his acrimonious split with the boy’s mother. In a rambling, profanity-laden recollection, he explains how he was sentenced to probation because he had no criminal history at the time.

Court records show he was charged with criminal harassment in December 2008. He was found guilty of the lesser offence of disobeying a court order.

He returned to court numerous times over the next decade.

It’s unclear whether his ex-wife was the target of the harassment in each case, but Schmegelsky said in an interview that at least some of the charges were filed because the boy’s mother feared he would murder her, saying he was schizophrenic and was not taking his medication. He denies these allegations.

Schmegelsky writes in the book that a forensic psychologist diagnosed him as “delusional,” a conclusion he disagreed with. His lawyer described him as “autistic” at one point, he writes, and he was ordered to attend a crisis counselling centre but couldn’t afford to attend for very long as it wasn’t a government program.

He said his son never attended any of his court hearings.

The boy’s mother did not immediately respond to a request for comment. There was no answer at her door in Port Alberni, B.C., earlier this week and she has not returned phone calls to her home.

Schmegelsky says he does not currently have a permanent residence and has been homeless for about two years, staying primarily in Victoria.

He says in the book that the birth of his son on Aug. 4, 2000, was “an experience of a lifetime – the greatest.” He says the tiny infant became “embedded” in his heart in less than a second.

“My life had just taken on a whole new perspective. I would do anything to protect him. Life was good.”

He says in the book that his then-wife left him in 2005, taking their young son with her to start a new life in Port Alberni. Schmegelsky describes losing his son as “the worst heartbreak I ever experienced.”

He has said that he did not see his son between the ages of eight and 16, at which age his son briefly lived with him in Victoria and they worked in construction together for a summer. He showed The Canadian Press recent photos and videos of his son on his phone.

Herb Loomba, the owner of the Redford Motel in Port Alberni, confirmed that the elder Schmegelsky stayed there about once a month in recent years to visit his son and he last saw them together on the young man’s graduation.

Alan Schmegelsky traces his pain back to the death of his father. He writes that his father received a tainted blood transfusion in 1985 and died of AIDS in 1990, but that his family was denied compensation because they filed the claim too late. The Canadian Press has seen a 2010 letter sent from his MP to the justice minister at the time asking why he has not been properly compensated.

The manhunt for the two homicide suspects continued in Gillam, Man., this weekend as it’s been nearly a week since the last confirmed sighting of the pair.

Police, aided by tracking dogs and drones, have been going door to door, checking every residence and abandoned building in and around Gillam as townsfolk maintain their own stressful vigil for the fugitives.

The aerial search effort got a boost Saturday with the arrival of a Canadian Air Force CC-130H Hercules aircraft equipped with high tech thermal detection gear.

In addition, the Assembly of Manitoba Chiefs said that it had requested help from the Bear Clan Patrol, an Indigenous-led neighbourhood watch group, and was co-ordinating teams to fly to First Nations communities including Fox Lake Cree Nation, York Factory First Nation, and War Lake First Nation.

Schmegelsky and McLeod are charged with second-degree murder in the death of University of B.C. lecturer Leonard Dyck and are also suspects in the fatal shootings of Australian Lucas Fowler and his American girlfriend Chynna Deese. 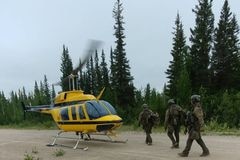 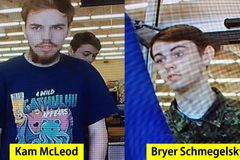 Residents of remote Gillam on edge as manhunt for B.C. murder suspects stretches on
July 27, 2019 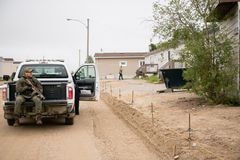