The B.C. and federal governments have agreed on a process that would ensure hereditary leaders within the Wet’suwet’en Nation, not elected chiefs, have the power to exercise authority over what goes on in their traditional territory.

A memorandum of understanding (MOU), which was ratified by hereditary leaders in late April after a series of presentations, would entrench the hereditary system of house groups as the recognized order of government.

The MOU also seeks to unify the split within the community between those who recognize the hereditary system as their preferred form of governance and those who support the elected chiefs and band councils.

The draft deal was reached in late February as the hereditary chiefs and their supporters blockaded construction of the Coastal GasLink pipeline, a crucial piece of infrastructure to the building of a massive project to export liquefied natural gas (LNG). Their protest garnered support across the country and led to blockaded railways, shutting down commercial traffic.

A resolution to the Wet’suwet’en’s dispute with Coastal GasLink was not reached and remains unresolved.

Details of the MOU were outlined in a PowerPoint presentation delivered in a series of clan meetings in March by hereditary chiefs. One presentation was photographed by a participant. It was then transcribed into a document, obtained by The Globe and Mail.

The MOU commits Canada and B.C. to recognizing that the 13 Wet’suwet’en house groups will act as the nation’s governing bodies. Rights and title will ultimately be held by them.

This effectively transfers the nation’s governing authority to the Wet’suwet’en hereditary chiefs, who helped craft the deal. However, the agreement also requires a six-month “reunification strategy,” in what appears to be an attempt to unite members behind the hereditary leadership.

The MOU stipulates that power will only be transferred once there is “clarity” on the Wet’suwet’en governance structures and laws.

Elected chiefs have strongly criticized the MOU and the ratification process, saying their representatives were not included by the B.C. and federal governments in emergency talks with hereditary chiefs about implementing rights and title.

The deal also alarmed others who have negotiated on behalf of Indigenous groups with an interest in resource development.

“This MOU consultation process has lacked any semblance of credibility,” the elected chiefs said in a statement. “The federal government, the provincial government and the hereditary chiefs have completely ignored many clan members and elected chiefs. These discussions have not included openness and respect for all parties.”

Eight hereditary house chiefs oppose the pipeline, while one house chief supports it and there are four vacancies. In contrast, five elected Wet’suwet’en band councils along the pipeline route support Coastal GasLink.

Coastal GasLink would transport natural gas from northeastern B.C. to LNG Canada’s $18-billion export terminal under construction in Kitimat on the coast. About 190 kilometres of the 670-kilometre route crosses the Wet’suwet’en’s unceded traditional territory, known as their “yin tah.”

The group of eight Wet’suwet’en house chiefs has led a vocal campaign against the construction of the pipeline, saying hereditary leaders, not elected band councillors, have jurisdiction over their territory located outside of federal reserves.

In late April, those hereditary chiefs agreed to sign the landmark agreement with Ottawa and British Columbia, with a virtual signing ceremony scheduled for May 14.

The MOU acknowledges a lack of unity among the Wet’suwet’en – an apparent nod to the pipeline dispute, and the governance issues that grew from it.

“It is a legitimate concern of elected councils to say, ‘Well, where do we stand?’ Because this MOU has implications for Indian Act bands across the country,” said former Ontario premier Bob Rae, who works with First Nations across Canada as legal counsel and negotiator.

“What concerns me is there are many others who will look to this MOU and say, ‘This is the precedent,’ ” Mr. Rae said.

“We’ve really got to think: What are we doing here? What is the implication for the claim of the traditional governance structures that they are the ones who should be negotiating this, and not band councils?”

Maureen Luggi, elected chief of the Wet’suwet’en First Nation, attended one of the clan presentations. She confirmed that the document’s contents reflected the information that clan members were given about the agreement, but cautioned that reunification will be a tough issue to tackle.

“When it comes to negotiating rights and title, it’s very difficult to achieve unity because we have been separate for so many years,” she said. Besides Ms. Luggi’s group, the other elected Wet’suwet’en councils along the pipeline route are Witset, Skin Tyee, Nee Tahi Buhn and Ts’il Kaz Koh (Burns Lake).

She said rights and title should be held as a collective, shared equally among members.

Two of the hereditary leaders, Ron Mitchell and John Ridsdale, did not respond to requests for comment.

In a letter dated May 2, those eight house chiefs and another hereditary representative said they acknowledge concerns raised by the elected band councils. The five elected chiefs say that they have been ignored in the process to reach the MOU, but the letter from hereditary leaders offers to “take some time to explore how we will work together, in our ancestral Wet’suwet’en homelands and communities.”

A statement from Ms. Bennett said her office previously contacted elected band chiefs to meet with them “virtually, or in person when it is safe to do so.”

Mr. Fraser said in an e-mail that he is “aware of concerns raised by the elected Wet’suwet’en chiefs and I will be reaching out to them to discuss this further.”

“This vague MOU is not about CGL, this is about a power struggle,” he said.

Wet’suwet’en agreement with Ottawa and B.C. disputed by elected chiefs
Subscriber content
May 1, 2020 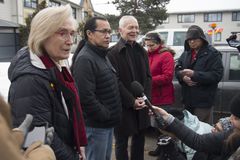 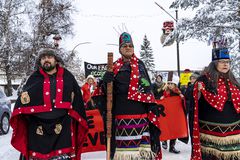