Several major pharmacy chains in British Columbia say they will offer vaccines on a first-come, first-served basis after some people seeking a dose were turned away because they were not customers.

Only a select number of pharmacies have been tapped to administer the public-health initiative in the Lower Mainland, and instances where pharmacies have limited access to a vaccine that is in very short supply were criticized as unfair, unethical and discriminatory by a public policy professor, and by those who were denied shots.

London Drugs and Shoppers Drug Mart are among the chains that say they will vaccinate whoever comes to their pharmacy as long as they have a vaccine supply, whether the clients are previous customers or not.

“There has been no direction to limit to store patients, nor is it our understanding that that is happening at any of our stores, anywhere in Canada,” Loblaw Cos., which owns Shoppers Drug Mart, said in a statement.

Vancouver resident Matthew Irving spent three hours on the phone on Thursday morning trying to book a vaccine appointment for his parents. When he finally got through to a Shoppers Drug Mart in Burnaby, the pharmacist refused to allow him to book over the phone because his parents had not been customers at that location in the past. He was invited to travel across town to try to book in person.

“I was quite surprised – I would have thought considering the whole hype around the fact that only a limited number of pharmacies were selected, that they would be more lenient as far as who was going to be allowed to get them at each pharmacy,” Mr. Irving said.

On Wednesday, Scott Bernstein told The Globe and Mail that he was denied a dose at a Save-On-Foods pharmacy because he was not a customer. On Thursday, he said he was called by the pharmacist at Save-On and told he could get a shot after all because the pharmacist was able to get an extra dose out of the vial.

The pharmacist told him: “I got you an extra one and I just want to let you know we are prioritizing our customers and the reason is, you know, because we have limited vaccines,” he said in an interview Thursday.

“I don’t want to be ungrateful. I’m really happy I got it. I’m happy they bend rules even though I’m eligible I’m glad they, they sort of helped me get into the queue. But I think it’s not really fair to other folks. The system should really be equal to people.”

“We’re not familiar with the specific cases that you’re referring to. But what we do expect from our members is that their process for administering the COVID vaccines, it’s fair, so that means that no one is receiving it at a priority at the expense of another eligible patient.”

She added that pharmacies have their own processes and she said she didn’t think a directive requiring pharmacists to stick to a first-come, first-served basis for delivering vaccines was necessary.

Health Minister Adrian Dix declined to answer a question about whether pharmacies could offer their own customers preferential treatment. Instead, he noted that pharmacists have done a good job of delivering flu shots and he said there is a scarce supply of COVID-19 vaccine.

Pharmacies were tapped Tuesday to get involved with B.C.’s vaccine effort when the B.C. government asked them to quickly deliver doses to people aged 55-65 starting Wednesday.

The doses became available after the National Advisory Council on Immunization recommended provinces pause giving the AstraZeneca vaccine to people under the age of 55 so more work can be done to investigate cases of rare and unusual blood clotting.

Vass Bednar, executive director of McMaster University’s new master of public policy in digital society program, said pharmacies are great at managing supply chains, making sure prices are consistent and having the right geographic penetration, so it makes sense to have them involved in delivering vaccines.

However, she said if some pharmacies at these stores are prioritizing their own customers, then it’s “pure discrimination.”

“You don’t only go to one pharmacy … So to my mind, there’s either miscommunication, bad information or discrimination at play. It seems inappropriate and I’m really surprised.” 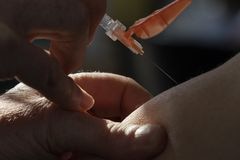 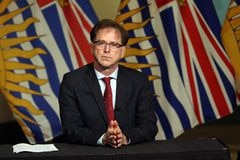 Follow Xiao Xu, Justine Hunter on Twitter @xiaoxuyvr @justine_hunter
Report an error Editorial code of conduct
Due to technical reasons, we have temporarily removed commenting from our articles. We hope to have this fixed soon. Thank you for your patience. If you are looking to give feedback on our new site, please send it along to feedback@globeandmail.com. If you want to write a letter to the editor, please forward to letters@globeandmail.com.
Comments