B.C. students could get an extended winter break, either provincewide or on a regional basis, as the pandemic caseload continues to climb to record daily highs in the most densely populated regions of the province.

Education Minister Rob Fleming said Monday the province’s restart strategy that returned most students to the classroom in September is a “living plan” and if the current restrictions imposed to curb community transmission are unsuccessful, classroom instruction may be curtailed once again.

“There are ideas about where we may revise some guidelines, either regionally or provincially, that will be considered,” he told reporters. “We’re obviously looking at other provinces that are considering an extension of the holidays, following on Christmas and New Year’s activities."

Since the weekend, four schools in the Lower Mainland have closed because of COVID-19 cases. The union representing British Columbia’s public school teachers warns that more will follow if the province doesn’t shift quickly to smaller class sizes in the communities where the pandemic is spreading quickly.

Mr. Fleming said the first line of defence is to try to curb the spread where is it happening the most: in homes and at social gatherings. On Nov. 7, the Provincial Health Officer issued orders in the regions that account for most of B.C.'s new cases – the Lower Mainland and the Fraser Valley – to limit social interactions and non-essential travel because of increased transmission of the coronavirus. The restrictions are in place at least until Nov. 23.

The Education Minister said a shift in school mask policies, as well as additional remote learning opportunities, are being discussed. After B.C.'s kindergarten-to-Grade 12 schools closed last spring during the first wave of the pandemic, the province saw a surge in interest in remote, online learning. There are now 45,000 students provincewide who are studying at home. Mr. Fleming announced Monday those programs will continue indefinitely. However, he maintained that transmission of COVID-19 within schools remains “exceedingly rare."

The BC Teachers' Federation (BCTF) is calling for immediate changes at schools operating in communities served by the Fraser Health Authority, which has roughly three-quarters of the province’s active cases. Teri Mooring, union president, said class sizes need to be reduced to a maximum of 15 students because teachers find it is “virtually impossible” to maintain physical distancing in classrooms with the typical class of 30 students. The balance of instruction would be offered through remote and online teaching resources – a hybrid model that is offered in many high schools.

“We want to see school stay open. And right now we have schools that are closed for two weeks, completely,” Ms. Mooring said in an interview. ”We see an urgent need for action here, and we’re not seeing that urgency being reflected in what government is doing right now."

The union is also calling for enhanced cleaning in schools and more protective barriers in circumstances where educators are dealing with high numbers of students.

As well, the BCTF wants stronger policy around the use of face masks. Currently, masks are required for students in middle and secondary school and for staff in high-traffic areas such as buses and in common areas such as hallways, but not in class.

This week, students in most B.C. high schools are sitting down with a fresh cohort of students, as the second semester begins. Ms. Mooring said that since September, her union has been calling for a mandatory mask policy, for students and teachers, that would last for the first two weeks of every semester.

At 10 p.m. on Sunday, she said the union was notified that there would be no such change. “We received an e-mail that says there was no need for any measures, that there was no risk in changing cohorts,” she said. She said teachers, especially those working in schools within the Fraser Health Authority region, are increasingly frustrated that their concerns are not being heard. “There is a disconnect between what the Provincial Health Office decides, and our experience in the field.” 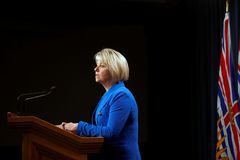 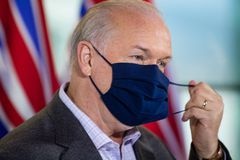 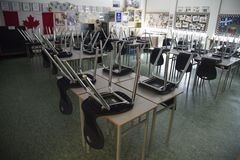