A B.C. Supreme Court judge says she will consider evidence from a psychologist who says a man charged with killing a pair of strangers may have been in a “gaming consciousness" at the time of the crime.

Prosecutors had sought to have Edward Shen’s testimony excluded in the case of Rocky Rambo Wei Nam Kam, a video-game fanatic charged with first-degree murder in the deaths of the husband and wife couple in their Vancouver home in 2017. They argued the gaming consciousness theory was composed by the clinical psychologist without a review of relevant science and without adequate training in forensic psychology.

“Dr. Shen’s opinion about Mr. Kam’s mental status in the context of the issues this case raises is relevant," she said as Mr. Kam looked on from the prisoner’s box in court Thursday.

Justice Gerow, hearing Mr. Kam’s case without a jury, said she was open to Dr. Shen’s theory that Mr. Kam may have been in an altered mental state, a gaming consciousness, when the crimes were committed.

Her ruling sets the stage for the closing arguments next week.

Previously, court heard that 27-year-old Mr. Kam would play for as many as 15 hours a day. Dr. Shen has said the defendant told him he enjoyed games that involved “ambushing, breaking in, spying and assassinating.”

A key issue in the trial has been why Mr. Kam committed the crimes to which he has confessed. Mr. Kam has pleaded not guilty to two counts of first-degree murder and, in testimony, said he has no idea why he killed the couple. His lawyers have said Mr. Kam committed the killings believing he was in a video game and could not form the intent to commit first-degree murder.

Justice Gerow acknowledged Dr. Shen has no training as a forensic psychologist, had limited experience assessing people accused of crimes, and had not undertaken any studies in gaming addiction or reviewed any articles on the subject.

However, she noted that Dr. Shen never said he was an expert on the effect of video gaming on individuals.

“Dr. Shen’s role was to attempt to assess Mr. Kam’s mental state, not only currently but in the past, based on his personal history," she said.

The judge said that view was based on Dr. Shen’s interviews with Mr. Kam and his expertise as a clinical psychologist, and that she accepted his work on the file was consistent with his professional qualifications.

She also noted that admissible evidence must be outside the expertise of the trier of fact, a title she effectively holds in this proceeding.

“The potential psychological affect of [Mr. Kam’s] personal history and the extensive use of fantasy on Mr. Kam’s mental health and perception of reality is, in my view, not something that the trier of fact can form their own conclusions on without assistance.”

In September, 2017, Mr. Kam spotted 64-year-old Dianna Mah-Jones unloading groceries from her car outside her home. He allegedly forced his way into her house and is charged with killing her and her 68-year-old husband Richard Jones.

At the time of the killings, Mr. Kam, a recent economics graduate of the University of Calgary, had moved to Vancouver for the “nice beaches,” Mr. Shen has testified, based on his interviews.

Mr. Kam, named Rocky Rambo because of his father’s affection for Sylvester Stallone movies, was arrested a month and a half after the crimes, having made no effort to flee the city or elude police.

Closing arguments in the case are to be presented on Tuesday. 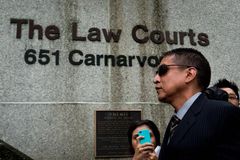 Alleged Vancouver killer may have been in ‘gaming consciousness’, psychologist says
February 7, 2020
Follow Ian Bailey on Twitter @ianabailey
Report an error Editorial code of conduct
Due to technical reasons, we have temporarily removed commenting from our articles. We hope to have this fixed soon. Thank you for your patience. If you are looking to give feedback on our new site, please send it along to feedback@globeandmail.com. If you want to write a letter to the editor, please forward to letters@globeandmail.com.
Comments