British Columbia will spend $5-billion in the coming months to provide financial assistance to individuals and businesses in response to the COVID-19 pandemic, offering cash to workers who lose their jobs, additional funds for essential services and tax relief for companies trying to stay afloat.

The pandemic response funds were rolled into an extraordinary, $44.5-billion fiscal package designed to keep the provincial government running for the next nine months without bringing the legislature back to pass the February budget. Passage was assured in just three hours by a handful of MLAs during an exceptional sitting of the B.C. Legislature.

The proceedings Monday began with each party acknowledging the 13 British Columbians who had already lost their lives to COVID-19.

Then, Health Minister Adrian Dix warned that the worst is yet to come.

In the past two weeks, B.C.'s hospitals have emptied more than 3,600 acute-care beds in anticipation of expected demand: “We are preparing for a much more serious situation,” he told the Legislature.

The province is offering $1.1-billion in income supports and $1.7-billion to expand critical services including health, housing and social assistance. Another $2.2-billion will provide relief to businesses, and B.C. will launch an economic recovery plan after the outbreak.

“There has to be hope as we get through these challenging times,” Premier John Horgan told a news conference in Victoria.

The minority government, considered so fragile when it was formed in the summer of 2017, showed unanimity around the pandemic response measures. “Partisanship has left the building,” Mr. Horgan said as he opened the unusual debate amid what he describes as “dark and troubling times."

He said the pandemic response package amounts to 2 per cent of the province’s GDP, but he fully expects this will just be the first round of assistance needed.

To maintain the recommendations of physical distancing set down by the province’s senior health officer, just 12 MLAs representing the three parties gathered in a chamber designed for 87 elected officials. With their words echoing in the near-empty House, the MLAs participated in a subdued debate, having already agreed in advance to pass the interim budget measures, as well as changes to employment standards to protect workers.

The B.C. assistance package backstops the federal plan announced March 18 by Prime Minister Justin Trudeau, which promises to support individual Canadians and businesses affected by the novel coronavirus and its resulting COVID-19 disease. Ottawa’s measures represent more than 3 per cent of Canada’s GDP and include $27-billion for an emergency aid package that offers immediate and direct help to individual Canadians and businesses, plus $55-billion in tax deferrals.

Mike de Jong, the Liberal House leader, said his opposition benches would continue to scrutinize the aid package to ensure that it is working as intended, but the Liberals would not stand in the way of passage. “In a place that is generally thought of as being adversarial, there is a collective purpose,” he said in an interview. “It is not just unprecedented, but eerie, to be in this Parliament.”

Green Party interim leader Adam Olsen said his party agreed to collaborate to ensure that assistance flows as needed. “Much love to you all,” he said in an emotional address to the Legislature.

A key feature of the aid package is the B.C. emergency benefit for workers, which will provide a tax-free $1,000 payment to British Columbians whose ability to work has been affected by the outbreak.

Ms. James said the one-time payment will be available for British Columbians who receive federal employment insurance, or the new federal emergency care benefit or emergency support benefit as a result of COVID-19 effects. This includes workers who have been laid off, who are sick or quarantined, parents with sick children, parents who stay at home from work while childcare centres and schools are closed and those caring for sick family members, such as an elderly parent. The workers can be EI eligible and non-EI eligible, such as the self-employed.

Ms. James said details are still being worked out, but she hopes the money will flow this spring.

As well, the B.C. climate action tax credit, which goes to 86 per cent of British Columbians, will be expanded to provide additional relief in July.

Businesses can now defer their employer health tax payments until Sept. 30. As well, the province is extending tax filing and payment deadlines for a range of taxes including the provincial sales tax.

In addition, the scheduled April 1 increase to the provincial carbon tax has been postponed, student loan payments will be deferred until September and BC Hydro is expected to offer payment deferrals to customers in need.

More details will be released on Wednesday, the Premier said, that will ensure renters will not be evicted as a result of the pandemic.

Ms. James told reporters the balanced budget she tabled last month is fundamentally altered, as revenue plummets while new spending demands are made. But, she said, that is not her main concern right now. “Our focus right now is getting people the support they need,” she said.

Emergency sitting of B.C. legislature to be ‘completely different’
March 22, 2020 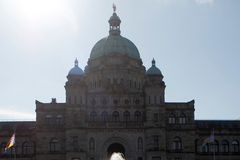