On a breezy afternoon in Delta, B.C., Paul van Westendorp is listening to bees.

They hum steadily as he shifts a rectangular frame, laden with honey, from a hive. The hum gets louder. He tucks the frame back into place and moves on.

His hands are bare.

“I never wear gloves except during harvest season. … If you’re starting to run too much on your tempo, rather than the bees’ tempo, they will remind you,” says Mr. van Westendorp.

“You have to try to listen to the bees, not just yank them around.”

For decades, Mr. van Westendorp has had his ears attuned to honey bees. Since 1990, he has been the provincial apiculturist for British Columbia, with a mandate to protect honey bees from disease and educate beekeepers about management and pest control.

Along the way, he’s become a town crier on the bees’ behalf, championing both honey bees and wild pollinators.

Look around, Mr. van Westendorp says, pointing to a nearby tangle of blackberry bushes. A decade ago, there might have been 10 species of native pollinators in that ditch. Now, there might be three.

That matters. Three out of four crops that produce fruits or seeds for human consumption depend, at least in part, on pollinators, according to the United Nations’ Food and Agriculture Organization.

A 2016 report by Agriculture and Agri-Food Canada estimated honey bee pollination contributes up to $5.5-billion a year to crop production in Canada.

With increased awareness of bees’ role in the food chain, and worries over how chemicals and habitat loss could affect them, beehives are popping up in school yards, roof tops and backyards.

Recognizing a need, Mr. van Westendorp developed a webinar on beekeeping, covering topics such as bee behaviour and disease identification. The first, held five years ago, drew about 120 people. Registration for the most recent one reached nearly 700 people, including people from across British Columbia and from other provinces.

Students have to register in advance, but Mr. van Westendorp says he insisted that the course should be free.

“We are trying to help beekeepers become better – but ultimately we do it to help the bees,” he says. “Because if you have better managers of bees, more will live and survive.”

He traces his fascination with bees to a childhood school trip in the Netherlands.

“The smell, the wax, the warmth. And all the bees just walking around minding their own business. Ignoring us completely. I just thought it was magic,” he says.

The fascination is still there, evident in the way he talks about bees. The facts spill out of him like pollen on a breeze. Honey bees don’t like to die inside the hive, so if you’re looking for weak or diseased bees, you’ll likely find them at the entrance of the hive.

The life span of a honey bee is six weeks.

You get to know the look of healthy larvae.

“I look at them as cribs, little babies in their cribs,” he says, pointing to a snugly-nestled grub. “If they are in the wrong position, there might be something wrong with them.”

In workshops and seminars, Mr. van Westendorp emphasizes biodiversity. At times, he finds himself at odds with agricultural priorities.

He cites a project that looked at ways to encourage bumble bees to pollinate blueberry fields.

Bumble bees, with their larger bodies, are better pollinators for blueberry flowers than honey bees.

The project found that the easiest way to encourage bumble bees to hang around was to make sure they had food after blueberries blossomed, by planting bee-friendly plants along crop boundaries.

Growers balked, saying that space could go to income-generating plants.

Mr. van Westendorp would like to see more attention paid to the tension between modern agriculture – with its push for affordable, plentiful food – and biodiversity, such as the hedgerows where wild bees can thrive.

“Modern agriculture is an organized drive to reduce biodiversity. We are intolerant to plants or anything that doesn’t have a dollar value. We tend to spray it, mow it, kill it. Because we want to have only that [commercially valuable] plant,” he says.

He’d like to see everyone – farmers, legislators, the general public – think more about the buzzing legion of bees. While he doesn’t begrudge conservation efforts focused on species such as the orca whale and grizzly bear, he worries about the smaller creatures, the building blocks.

“Pollinators are so important – they are the indicator species, the canary in the coal mine,” he says.

“And the problem is, all of us are dependent on the plant world to live. ... If you have these stresses applied to many ecosystems, you are in trouble.”

Opinion
Relax! The bee-pocalypse isn’t upon us
Subscriber content
August 3, 2019 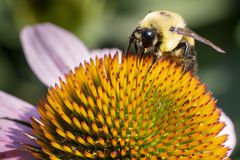 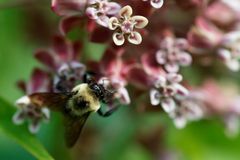