Weeks before the harvest in British Columbia’s best-known wine region, vintners are hoping forest fires that have ravaged the province’s Interior abate so the air, heavy with smoke and particulate, doesn’t impact the taste of their grapes.

Researchers have found smoke can affect the taste of wines and add an ashy, smoky aroma, especially if fires are nearby and it is close to harvest time. A prominent sommelier says the impact can vary from subtle to pronounced.

University of British Columbia chemistry professor Wesley Zandberg leads a team that has studied the impact of wildfire smoke on B.C.’s wine industry for several years. In a recent report, he wrote that smoke poses “massive threat.”

“Most tainted wines smell bad and are unsellable,” the report said.

In an interview, Dr. Zandberg said smoke exposure may – but not necessarily – lead to tainted wine. “But if the crop is actually ruined, if the wine actually is tainted, there’s nothing you can do with it.”

He added that fresh smoke poses a strong threat, and the risk increases when very ripe grapes are exposed.

Miles Prodan, president and CEO of Wine Growers British Columbia, said the impact of smoke on grapes is complicated.

If they are exposed for a long time, volatile compounds can be absorbed that are then released during fermentation. That could result in a “campfire” or “burnt” character in the wine, Mr. Prodan said.

Smoky aromas come from a range of small, volatile phenols. When phenols permeate the grape, they can bind to sugars and other compounds in the skin. During fermentation and aging, the compounds may be released, which can result in additional smoky aromas and flavours.

“There is like perceptible difference in flavour, especially once you are looking at grapes that are further along in maturity,” she said. If fires persist through August – and especially into September – the smoky quality would be more noticeable.

Even without a trained palate like hers, Ms. Jones said some average consumers can also tell the difference. But for many of them, the smoky flavour can be similar to the taste of wines aged in oak barrels.

Even so, for high-priced wines people want to cellar and keep for a long time, Ms. Jones said, “that might be more challenging.”

She and Dr. Zandberg both remember B.C.’s record-breaking fires in 2017 and 2018, and how the fires frustrated some wine producers.

“And it’s hard. ... If you’re a winemaker and your entire wine region is full of smoke, you only have those vineyards to choose from. What do you do?” Ms. Jones said.

Mr. Prodan said his organization does not track losses of B.C. growers. So, there is no estimate of industry-wide wildfire smoke impact in 2017 and 2018, only anecdotal examples from individual wineries.

“If the wine is heavily impacted by smoke, it won’t go to market. It’s up to the individual winery to determine what they want to do,” Mr. Prodan said.

But smoke does not always have a negative effect. Last year, B.C. had a relatively quiet wildfire season, but smoke from California lingered in the Okanagan for a long time. Dr. Zandberg said that might have helped the province produce high-quality wines.

“In a weird paradox, the smoke might have helped because it actually kept the temperature cooler. And actually it’s delayed the ripening process, so the quality of the fruit was better.” In some cases, the wines affected by smoke became a hit.

When winemaker Bill Eggert of Fairview Cellars in Oliver, B.C., fermented his grapes in 2015, he noticed a hint of “guaiacol” – a compound that indicates smoke exposure and could be a major contributor to smoke taint.

Mr. Eggert had sampled smoke-infused wines before, and some tasted and smelled like an ashtray. Fortunately, he said, the concentration wasn’t strong in his wine. So he decided to bottle it and take the chance.

“It turned out that over 80 per cent of the people that tasted the wine bought it [and] loved it,” he said. “And a whole bunch of them have actually come back and looking for more, begging me for more, but I sold out.”

This year, though wildfires have devastated the province’s Interior, many vintners, including Mr. Eggert, remain positive. He said one fire was near his vineyard for a few days, but others did not get so close.

At the Phantom Creek Winery, also in Oliver, winemaker Mark Beringer said staff were asked to evacuate for seven days, but the fire didn’t threaten the winery or the vineyards. “The ambient smoke that we’ve been seeing seems to be less of an issue, and doesn’t have as much of an impact,” he said.

According to Dr. Zandberg, the smoky smell usually remains undetected until after wineries have picked grapes and fermented them, which could lead to huge losses later. So his team developed a test that can determine the concentrations of chemical markers of smoke exposure in grapes or wines.

Mr. Beringer’s winery has been doing trial fermentations to make sure tainted grapes aren’t processed. He has no great concern about the taint – at least not yet.

“Who knows what could happen in the next four to six weeks prior to harvest he said. “But right now, we are pretty confident that we’re in good shape.”

For crews batting B.C. wildfires, a cool, damp weekend ahead may provide some relief
August 20, 2021 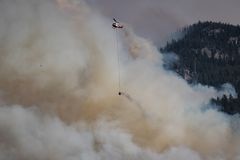