British Columbia’s rate of COVID-19 has begun to decline, easing pressures on the health care system and allowing health officials to turn their attention to how and when schools and businesses will be able to return to some level of activity.

During a media briefing Friday, Health Minister Adrian Dix said elective operations postponed to give the health system flexibility to deal with the pandemic will likely resume in May, with further details to come soon.

The Health Minister and Bonnie Henry, the Provincial Health Officer, talked about outlining a plan next month for reopening parts of the economy and, eventually, schools. They provided no timetable.

Dr. Henry said although British Columbia is far from returning to normal, health officials are looking at easing restrictions.

“We need to find the balance of how much contact still protects us in our communities and our families, but allows us to open things up,” she said.

British Columbia had its first COVID-19 case in January, with imported cases through March, and then community transmission that largely involved outbreaks at long-term care homes. On March 18, the NDP government declared a provincial state of emergency.

On Friday, health officials said 45.7 per cent of critical-care beds are occupied, and the number of available critical-care ventilators for adults has increased because new ones were secured and some arrived from the federal stockpile.

“B.C’s actual case rate and actual ICU admission rate has been far below what was potential based on other jurisdictions’ experience and data. B.C. is experiencing a slowing in the rate of new diagnoses and stabilization of COVID-19 patients in hospital/ICU,” says a briefing document released to the media.

The outcome is being linked to public-health measures.

Dr. Henry said the pandemic started earlier in B.C. than in other parts of the country. “Compared to Canada, we are still at a fairly low but steady rate” of increase in the number of cases, she said.

Mr. Dix said the government will release new modelling in early May that will be the basis of a plan to manage the economy, including “a new framework for how everybody needs to act. [It] will have different implications for different industries, of course, because different industries deal in terms of issues of physical and social distancing differently,” he said.

On schools, Dr. Henry said she would like some children of health care workers going back to allow their parents to resume their jobs.

“It may mean smaller classes, only some children going to school at certain times, none of the mingling that we used to have with kids getting together," she said. "As well as some hybrid, perhaps, of some children doing remote learning while others are in a classroom situation, and may be able to maintain those safe distances.”

Representatives of the B.C. Teachers’ Federation were unavailable for comment on Friday. A spokesperson for the B.C. education ministry said the ministry follows the health officer’s advice on schools.

On the business front, Dr. Henry said she foresees a period in which some people work from home and smaller numbers are in the workplace.

Jock Finlayson, executive vice-president and chief policy officer of the Business Council of British Columbia, acknowledged Dr. Henry has to approve resumption of the economy, but said it’s crucial to do so.

“We do need to recognize that, as important as managing the pandemic is, and we defer to the people in government on that, it’s also important that we have a functioning economy. We don’t want too many more months like March, where 132,000 people [in B.C.] lost their jobs,” he said. “That’s three-and-a-half years of job growth wiped out in one month.”

He said he is concerned B.C. businesses will go under. “The sooner we can get back to, not normal conditions, but a better place where the economy is 75- or 80-per-cent open for business instead of 30 or 40 per cent, it would make a big difference.” 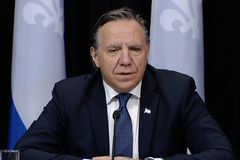