Indigenous communities have won the right to be consulted about child-protection cases in British Columbia under new legislation introduced Tuesday.

The changes are designed to reduce the number of Indigenous children and youth in care, who are taken from their families at a rate far higher than the general population. Indigenous people make up less than one-tenth of the B.C. population but more than 63 per cent of children in government care, and many end up being fostered in homes outside of their communities.

“Children have the right to be connected to their communities, traditions and culture,” Katrine Conroy, the Minister of Children and Family Development, said in an interview Tuesday.

The 19-page bill amends the province’s existing child-protection law to allow an Indigenous community to be informed where safety concerns are raised involving a child who is a member of that community. That gives those communities the opportunity to help develop a plan of care so that the child isn’t automatically taken away into a foster home.

For the more than 4,200 Indigenous children currently in government care, social workers will now be required to “make reasonable efforts” to involve a child’s Indigenous community in their care plans. Ms. Conroy said that doesn’t mean opening up every existing case file, but First Nations will have the opportunity to request reviews for children and youth who are currently in care.

The law redefines the test that determines what is in the best interests of a child. It will now include the importance of a child belonging to, learning about, and practicing their Indigenous traditions, customs, and language. The courts and the ministry will be required to apply this test when making decisions about the child.

Across British Columbia, Indigenous communities have been pushing for the right to regain control over the welfare of their children. A central goal is to protect children without severing the parental bonds, and without their children losing their cultural connections.

In March, the B.C. Supreme Court ordered the ministry’s social workers to return an Indigenous infant who was taken from her mother at birth, ruling that there were less disruptive means of protecting the child than apprehension.

It was a groundbreaking decision and it prompted Ms. Conroy to commit to changing the law this spring. The mother’s Huu-ay-aht First Nations had spent years putting together services to ensure that their children could be protected within their community, and the judge accepted the Huu-ay-aht plan to provide supervision and services so that the baby could bond with her mother.

Chief Wayne Christian, leader of the Shuswap Tribal Council, was in the House when the bill was introduced. He later told reporters his community has spent 38 years calling for changes that would allow the Shuswap jurisdiction over their own children.

The bill introduced Tuesday will lay the foundation for that change, he said, after generations of families have been torn apart by a bureaucratic system that often left First Nations governments in the dark about protection concerns until after the ministry had acted.

“This opens the door to stopping the flow of children into that system,” he said. “It’s very significant.”

The legislation, when passed, does not grant First Nations jurisdiction over child welfare, but does provide a stepping stone in that direction, Ms. Conroy said. She said B.C. needs to engage with the federal government now to ensure that communities seeking jurisdiction have the resources to take on that responsibility.

Mr. Christian said that is a critical next step: “You can have legislation, but if you don’t have the resources to implement it, it doesn't make much sense.” 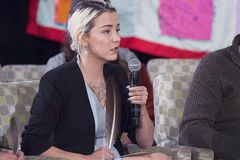