One of British Columbia’s largest sources of greenhouse gas pollution, the oil and gas sector, will be required to slash emissions by converting to electricity-powered processing under a provincial climate action plan that will be announced on Wednesday.

Most of B.C.’s 110 gas processing plants still use fossil fuels to power their facilities because there are few transmission lines delivering electricity across a vast region in the northeast corner of the province. Just 13 gas plants in British Columbia use electricity for processing.

The provincial government said on Monday that it will announce its new climate plan on Wednesday. The requirement for the sector to convert to electricity will be a part of it, according to two sources who are familiar with the province’s plans but were not authorized to discuss the details.

The province’s Crown-owned utility, BC Hydro, is likely to play a major role in the electrification of the province under the new climate plan. To meet B.C.’s legislated targets to reduce emissions of greenhouse gases (GHGs) by 2030, the province will need more electricity, more transmission lines and more distribution services to make the transition from fossil fuels to clean energy in homes, vehicles and industry.

Delivering a major infrastructure expansion will be challenging for BC Hydro, which already carries a dangerously high debt load. Since 2011, the provincial auditor-general’s office has decried the utility’s practice of “rate smoothing,” in which it masks the amount of its debt by moving it into deferral accounts. And the bond rating agency Moody’s has flagged Hydro’s burgeoning deferral accounts as a danger to the province’s triple-A credit rating.

Premier John Horgan is set to announce the new plan in Vancouver, along with Green Party Leader Andrew Weaver. Mr. Weaver’s support is key to upholding the minority NDP government, and he has been critical of the government’s efforts to secure a liquefied natural gas (LNG) industry, which will drive a significant increase in the production of GHGs.

Mr. Weaver initially threatened to bring the government down over LNG, but the NDP government has since approved a massive liquefied natural gas plant in Kitimat, after assuring the Green Party that reductions elsewhere in the new climate plan will account for the increased emissions associated with the LNG Canada project.

According to the National Energy Board, the largest emitting sector in B.C. is transportation, which makes up 37 per cent of emissions. The oil and gas sector is in second place, accounting for 22 per cent. Buildings, both residential and commercial, account for 12 per cent.

Cutting emissions in the production of natural gas will reduce the carbon footprint of the LNG industry. The first phase of LNG Canada project will account for almost 9 per cent of all of B.C.'s total emissions that are allowed in 2030, according to figures provided by the provincial government when the final investment decision was announced.

David Austin, an energy lawyer at Stirling LLP, said the electrification of B.C.'s gas fields is long overdue. Three years ago, he urged BC Hydro’s regulator to move forward with new transmission lines to serve the gas fields, but just one line has been completed that serves a small section of the region.

“The opportunity to electrify has been around for years," he said. "Why has British Columbia been so slow in recognizing and responding to this opportunity?” Mr. Austin noted that Texas oil and gas companies have driven an unprecedented spike in electricity consumption this year as they move away from generators powered by fossil fuels.

“The electricity infrastructure should be put in as fast as they possibly can, so that the gas industry is electrified,” Mr. Austin said, but added that proper consultation with Indigenous communities cannot be rushed.

BC Hydro spokesperson Mora Scott said electricity demand from the natural-gas industry is five times higher than it was five years ago. Most of it is delivered through a new line in the Dawson Creek-Chetwynd area that cost $299-million, and is fully subscribed. Construction of a second new line, the $298-million Peace Region Electricity Supply project, started in the summer and is expected to be completed by the end of 2022.

The Canadian Association of Petroleum Producers, in a report released in November, said B.C.'s natural-gas producers are already leading the way to cut GHG emissions, “but government can be a strong partner with industry” by expanding tax credits to encourage electrification. 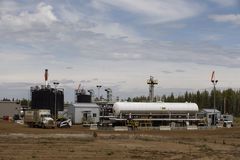 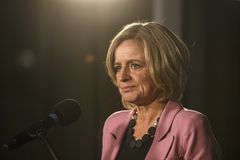 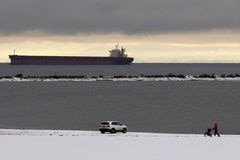