When homeless people in Duncan, B.C., were asked two years ago how they’d like to live, they said a small cluster of simple sleeping cabins would be great. That way, they’d have a few others around for some protection but not so many that it would become a chaotic, unregulated camp.

So that’s what affordable housing advocate John Horn decided he would push to create as Duncan’s homelessness crisis accelerated last year during the COVID-19 pandemic.

Last Friday, 12 people moved into the first cluster of little sleeping cabins that Mr. Horn had built on a downtown city parking lot. The eight-foot-by-eight-foot rooms have a window, a door, a plug, an electric baseboard heater and a bed. Another two clusters are in progress. Cost: a little less than $7,000 a cabin.

That idea is the latest advance in the effort to tackle homelessness, as even temporary modular housing, seen a few years ago as a revolutionary new approach, is now viewed as too expensive and too slow to build given the disaster unfolding in many cities.

The cabin mini-village success is particularly satisfying for Mr. Horn, a former social planner in Nanaimo, B.C., who was hired by the Cowichan Housing Association a year and a half ago to come up with creative new ideas for tackling housing problems.

“I very much believe in direct action,” Mr. Horn said. He’d become very tired of the status quo approach to homelessness, which was “telling a guy he has to live in the forest for three years until we can find a real apartment for him.”

The cabin villages need rules and oversight, he insists, or they won’t work. It costs almost $52,000 a month for security guards every night. But it ensures that everyone feels safe. There are common washrooms provided and meals are brought in, as they have been for the area’s tent camps of homeless people since spring.

Duncan’s cabins for homeless people are a first for a B.C. city, but they won’t be the last as cities, philanthropic organizations, businesses and private individuals are increasingly looking for ways to provide homeless people with options besides sleeping outside or in crowded shelters, while waiting years for a subsidized apartment.

The emergence of near-permanent outdoor camps of homeless people in B.C. cities from Nanaimo to Maple Ridge to Kelowna, as well as Vancouver and Victoria, is driving a new desperation to find more solutions. The pandemic has only heightened that.

“The thing I like about these proposals is they seem to be originating in places other than the usual. That tells me there’s broad community support … for being creative and trying different things,” he said.

Mr. Eby opposed this kind of housing option when he was an advocate in the Downtown Eastside, he admitted.

“I’ve been critical, way back. My fear was that the lowest cost, lowest standard that people could get away with for housing would be seen as a total solution. Happily, I think that fear hasn’t materialized. These projects are broadly seen as transitional and supportive of a larger response.”

BC Housing, the subsidized housing agency which is part of his ministry, is providing a small amount of money for a different kind of temporary-house project in Victoria.

There, a private developer and building company called Aryze has offered to do the design and permitting work to transform shipping containers into 30 housing units.

“It’s just not acceptable to live in a tent for a year because you have no other place to go. In Canada, people should not be living like that,” said Ryan Goodman, an owner and general manager at Aryze, a small firm dominated by a lot of younger people who felt like they needed to do something.

City council has given the company permission to apply for a temporary permit to allow the homes to go onto a city parking lot until September, 2022. That lot is next to a park that had a camp of homeless people who were flooded out recently.

“It’s unprecedented that the community is building homes for each other,” said Victoria Mayor Lisa Helps, who also praised Mr. Eby for being “incredibly supportive.”

One city that would seem like the likeliest candidate to explore such ideas is Vancouver.

But the concept of tiny-home villages, as they’re being called by local advocates, is running into roadblocks from city staff, despite support from many Vancouver councillors, as well as builders, academics and people who work among the homeless in the Downtown Eastside.

After motions by COPE Councillor Jean Swanson and Green Party Councillor Pete Fry last fall asking for tiny-home villages as one emergency option, staff issued a report cautioning they’d cost a minimum $40,000 each to build and another $40,000 a unit for site prep. They’d have to comply with the building code and there is no available space for them anywhere in the city, the report found, among other concerns.

That’s been met with frustration by those who are outraged that hundreds of people are sleeping on concrete sidewalks and wet grass this winter in the city.

“As far as I’m concerned, there’s tonnes of opportunities. We are hearing from people with churches saying, ‘We have a parking lot, toilets and showers, kitchens. They can go here.’”

“How desperate do we need to get about this?” asked Ms. Blyth, who runs the overdose prevention site in the Downtown Eastside. She spent last Thursday night handing out mats and blankets to people on the sidewalk along Hastings Street, where many were lighting small fires in buckets to keep warm.

So some are taking matters into their own hands.

Bryn Davidson, whose company Lanefab focuses on custom passive homes and laneway houses, is building what he calls a “tiny townhouse” with prefab panels that comes in at 100 square feet – small enough to be exempt from normal building-code requirements because it’s classified as a shed. (That was the approach in Duncan as well.) He’s financing the $20,000 cost himself.

Ms. Blyth is planning to put Mr. Davidson’s house on the prevention centre’s outdoor site as soon as it’s ready, whether the city likes it or not. She’s got someone picked out to live in it.

That’s Al Flett. On Friday morning, the 42-year-old was at the overdose prevention site as usual, warming up.

“A lot of time, I keep walking all night so I don’t freeze. I sleep wherever I can during the day,” said Mr. Flett, a part-Cree artist who is known in the area for his drawings and paintings on found things, skateboard decks and any paper or canvas he can find.

He last had a place to live a year ago, when he worked growing marijuana at a Richmond, B.C., farm. But that fell apart when the man in charge of the money stopped paying him, he said. He won’t stay at the Strathcona Park encampment because he’s worried about the violence there.

Last Friday morning, Mr. Flett didn’t know where he would sleep that night. Or any other night after that for a long time. He hopes his little house arrives soon. 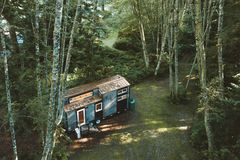 Project aims to give homeless veterans a roof over their heads and a supportive community
August 30, 2019 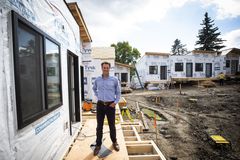