Paul Dragan usually has 150 bicycles in reserve at his warehouse at the beginning of the year to provide backup supply for the four outlets of his Reckless Bike Stores chain in Vancouver. That warehouse typically doesn’t get emptied until the first week of August.

But this year, every bike in it was gone by the end of April, and Mr. Dragan is now working ferociously to scoop up whatever new supply he can get from his regular Quebec dealers. Supplies are tight across the country as the COVID-19 pandemic has prompted commuters, fitness buffs and families to go on bike-buying binges.

The demand for e-bikes is also surging. Julian Brown, who owns an Ebike West store in Calgary and one in Vancouver, said he is seeing much more business than usual and far more than the expected growth for a relatively new product. Many businesses, in particular, are looking for cheap options for delivery or other transport needs. “A few customers need to go back and forth for their job,” he said.

In Mississauga, Ira Kargel, who’s a partner in the four-store Gears Bike Shop chain, shut down its website for 24 hours two weeks ago. “We were getting 100 orders a day. It’s just insane for me,” a frazzled-sounding Ms. Kargel said.

At Sweet Pete’s Bike Shop in midtown Toronto, owner Peter Lilly says his team hasn’t seen demand like this for 20 years. Entry-level bikes – any under $1,000 are now sold out – are going the fastest, but Mr. Lilly said buyers are also spending more than they did in previous shifts away from public transit, such as those in years when there were fears of strikes.

Sales are so strong that many bike-shop owners say manufacturers are out of some models and say they can’t resupply stores until the fall.

But what’s puzzling to many bike enthusiasts is how slow major Canadian cities have been to respond to the surge by providing more bike space on streets. Many local governments did not start moving until about 10 days ago, even though data and anecdotal reports indicated bikes have become much more widely used.

European cities, and even some American ones, have moved aggressively to transform their streets, saying they need more space for cyclists not just for the moment, but to help relieve future pressure on transit systems that won’t be able to carry as many people after the pandemic because of physical distancing. And the window may be closing if commuters switch to autos from transit when they start returning to work.

In environmentally conscious Vancouver, cyclists and bike-shop owners are perplexed and frustrated by the city’s lethargic response. “You would think Vancouver would be the first people to do something like that but they haven’t,” Mr. Dragan said. He’s expecting to see the demand continue as gyms and schools stay closed, while some people start travelling to work again.

Canada’s three largest cities didn’t make announcements about plans to provide more walking and cycling space on streets until more than two months after they essentially shut down in early March.

Edmonton, Calgary and Winnipeg moved sooner, with plans announced throughout April to make some streets low-speed or locals-only zones.

Of the major cities, the plan Montreal announced last Friday is the most ambitious – almost 200 kilometres of streets to be repurposed. But neither Montreal, Toronto (57 km promised) nor Vancouver (50-plus promised) has come up with details yet. Toronto closed parts of Lake Shore Boulevard last weekend, which was hugely popular, but has just a few traffic cones on other streets.

Vancouver closed Stanley Park to cars several weeks ago and one road lane along its downtown beaches – a move that is aimed at recreational cycling in the most popular visitor spots.

But all that’s happened since then is a city-staff presentation last week that talked about creating “slow” streets – not completely blocked to cars, but with some mechanism to show they’re meant to be used more by cyclists and pedestrians. There was no clear timeline or specifics to the plan. In the meantime, there’s already a push to bring car traffic back to the park.

Statistics and anecdotal observations in many major cities indicate that cycling remained relatively strong over the past two months, while transit ridership fell off a cliff and vehicle traffic dropped dramatically.

Cycling saw less of a reduction – or even some increases – for several reasons, enthusiasts say. Many transit users are now desperate for an alternative. Some gym- and pool-deprived fitness buffs still want to exercise. And many families are desperate for an activity for their children, now at home 24/7.

“They’re buying them because there’s nothing else legal to do with these kids and they want them out of the house. And people are saying, ‘I’m sick of walking around our block,' ” Ms. Kargel said.

In Montreal, the bicycle counter on the popular Rachel bike route registered 75,000 riders for all of last April. This April, it was down less than a third, to 52,000. That’s while much of the city’s auto traffic evaporated and subway ridership was down 91 per cent.

Toronto has been similar. Car traffic was down by an average of 55 per cent from March 23 to May 15, the city’s communications office said, while cycling is up 20 per cent. In Calgary and Edmonton, cycling dipped in early March, but has increased to triple those levels since then. Auto use in both cities is still far below prepandemic levels, but bike proponents worry that won’t last long.

Michael Longfield, the executive director of Cycle Toronto, said if cities wait too long to act on plans they’ve announced, commuters will end up driving even more than they did in the past. And that will result in massively congested cities.

If even 10 per cent of the people who normally take transit in Toronto were to start driving, Mr. Longfield said, commuter auto traffic would double. 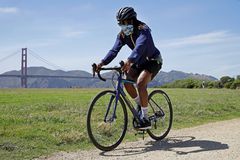 Bike shops busier than ever, but owners worry about shortage of new bikes and parts
May 23, 2020 Opinion
Canada’s new normal begins in our cities
May 23, 2020 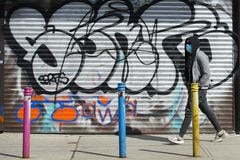