Derick Walker touches the machine’s glass surface and holds his palm up to a scanner when prompted. He answers some survey-style questions – “How do you feel today?” – before the device whirs and dispenses a small plastic package containing four white tablets. The whole process has taken a few seconds.

Mr. Walker is the first patient to use MySafe, an ATM-like machine that dispenses the opioid medication hydromorphone. Located next to a supervised drug-use site in Vancouver’s Downtown Eastside, the machine is one physician’s response to the growing calls for a safer supply of drugs.

Instead of using highly toxic and unpredictable drugs bought off the street, registered participants can pick up the pharmaceutical-grade opioids to use as they please. Most will crush, cook and inject them, though some may choose to take them orally.

“We’re giving people the opportunity to use drugs where and how they want,” said Mark Tyndall, who is also a researcher and professor at the University of British Columbia.

“That’s going to open up a lot of possibilities to people who are not willing or interested in going to a place and having people watch them use.”

In Vancouver, which has been particularly hard hit by Canada’s overdose crisis, innovation has become the norm. It is the first city in North America to open a sanctioned supervised-consumption site, the first to offer opioid agonist treatment (OAT) – also called replacement therapy – with pharmaceutical-grade heroin, hydromorphone and fentanyl patches.

But Dr. Tyndall’s deliberate move away from a clinical model has put him on a lonely path. Existing programs that allow for injectable OAT typically require patients to be present at a clinic two or three times a day, at set times, to inject under supervision.

There are just a handful of doctors in Canada that allow patients to take hydromorphone tablets home for the purposes of treating opioid use disorder. Of those, Dr. Tyndall is even more of a rarity: He does not require any sort of continuing clinical care. He says his program is not addiction treatment, rather an alternative to the contaminated drug supply.

The introduction of technology – a device that looks like a cross between an ATM and a vending machine, but functions closer to a safety deposit box – makes his program a curious anomaly.

The program works like this: After an initial assessment by a physician, a participant is prescribed a set amount of hydromorphone tablets that a pharmacy pre-packages and delivers to a patient representative on site. The packages, which each bear the participant’s name, are then loaded into the machine.

Once registered, a participant need only hold his or her palm to the machine’s biometric scanner and answer three questions – How do you feel today? Is your dose enough? Rate MySite – before the tablets fall to a pickup port, not unlike a bag of chips in a vending machine.

A camera above the touch screen captures a four-second clip of every interaction, and every package that is dispensed is logged in real time. The maximum dispensed each day is capped at 16 eight-milligram tablets, though not everyone will require that much.

There are currently five participants enrolled in the program; the machine can accommodate up to 48. Dr. Tyndall says the model is easily scaleable, and is hopeful others express interest.

For Mr. Walker, the first participant, the program’s impact has been drastic. An opioid user of nearly 20 years, Mr. Walker said he had recently fallen into “a really dark place." His days had been consumed by his addiction, running errands for drug dealers in exchange for small amounts of drugs to stave off withdrawal.

Reliable access to a regulated supply meant no more chasing the next high, and no more overdosing on whatever fentanyl mix is in circulation.

“I can choose to use it either orally or [intravenously],” the 43-year-old said. “My long-term goal is to not use intravenously any more, because I have goals of having more responsibilities in my employment and I don’t want to be carrying around needles.” He appreciates the autonomy the program affords him: “I don’t feel like I’m being babysat."

Other take-home hydromorphone programs in Canada have shown promising results. Andrea Sereda, a physician at the London InterCommunity Health Centre in London, Ont., launched a program with three patients in 2016 – back when the biggest risks to her patients were the unsafe practices around procuring and injecting diverted hydromorphone bought on the streets. The program expanded as fentanyl swept the local drug supply and today has 113 patients.

In her program, tablets are dispensed daily and patients visit with a physician about once a week. Collectively, they have “dramatically” decreased illicit fentanyl use and engagement in sex work and petty crime, Dr. Sereda said. There has been an increase in uptake in primary care and HIV treatment, and about half are no longer homeless. There have been no overdose deaths.

“The people having overdoses no longer had overdoses because they had a predictable supply,” Dr. Sereda said.

But the idea is not without its critics. In October, Lisa Bromley, a family physician in Ottawa who specializes in addiction medicine, published a commentary outlining her concerns with take-home hydromorphone.

Conventional options to treat opioid use disorder such as methadone, buprenorphine and slow-release oral morphine have been rigorously studied and their benefits are incontrovertible, Dr. Bromley wrote. For those who don’t benefit with these options, supervised injectable OAT with heroin and hydromorphone, while intensive, have also been proven safe and effective.

In an interview, Dr. Bromley said she supports providing access to a safer supply of drugs and current small-scale pilot projects appear to be low risk. But scaling up such a model could open the door to unintended consequences such as diversion, inadvertently exposing new people to opioids and steering people away from traditional, evidence-based treatment, she said.

“We don’t have good ways of capturing those harms right now, which I think is my biggest concern,” she said. “Maybe Dr. Tyndall has a plan about how to measure harms, but these may be subtle and take years to emerge.”

Asked about diversion, Dr. Tyndall says it’s possible, but unlikely. And if it does happen, those pills would probably go to a participant’s friend or partner – another person who likely would have been buying contaminated illicit drugs, he said. He is asked about a hypothetical worst case scenario: diverted pills and a fatal overdose.

“What if someone gave a clean needle to someone and they injected themselves and died? What if someone went into a supervised-injection site for the first time and used drugs?” he responds. "All these arguments are the same for any harm reduction. It’s not without any risk.

“Four years into this massacre, we can’t make all our decisions based on worst case scenarios. We have to do something.” 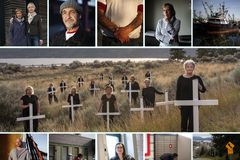 New research suggests daily cannabis use could be effective alternative to opioids for chronic pain
November 28, 2019