Wendy Stueck and Andrea Woo
Vancouver
Published May 25, 2020 Updated May 25, 2020
Comments
Text Size
Please log in to listen to this story. Also available in French and Mandarin. Log In Create Free Account

British Columbians bought more alcohol this March and April than they did in the same period the previous two years, echoing trends seen elsewhere in the country as the coronavirus pandemic took hold.

The wholesale value of alcohol sold in the province rose to $605-million for the two-month period, up 21.5 per cent from $498-million during the same period in 2018, according to figures from the B.C. Liquor Distribution Board.

The volume of beer, spirits, wine and other alcoholic beverages also climbed, from 65.5 million litres in 2018 to 76.6 million litres this year. The figures include sales to about 670 private liquor stores, 197 government-run liquor stores and more than 8,000 licensees such as restaurants, bars and stadiums. The figures also include direct sales from wineries, which have been emphasizing online sales during the pandemic.

British Columbia declared a provincial state of emergency on March 18 in response to the novel coronavirus and has since taken multiple steps to help fight its spread. Liquor stores were declared an essential service and kept open, but on March 20 the province ordered restaurants to close except for takeout and delivery service. (Some are expected to reopen this month with new infection-prevention measures in place.) The same month, the province tweaked liquor regulations to allow restaurants to deliver booze with food orders.

The LDB did not provide a breakdown of sales by sector, so it’s unclear whether licensees or stores have accounted for the lion’s share of increased sales. But with stadiums and restaurants closed, typical sales patterns have been upended.

It’s also not clear how much of the increase can be chalked up to stockpiling and how much reflects increased consumption. Regardless, addiction experts are keeping an eye on the trend.

“We know from addictions research that as a pandemic rolls out, the risk is that easy availability leads to addiction,” says Kerry Jang, a former City of Vancouver councillor and a professor at the University of British Columbia’s Department of of Psychiatry.

People are at home more, and may be feeling stress from job loss, illness or homeschooling their kids. At the same time, boundaries between home and work, days of the week and even hours of the day have blurred or disappeared.

“Now that everybody has kind of stocked up and stored it in our homes, it’s really easy to drink a lot,” Dr. Jang said.

He added: “Our normal social cues have all been lost. Either we’re not driving, or my wife or my mother is not giving me that look from across the table.”

Potential negative impacts of increased consumption may be reflected in coming months in more calls to crisis lines and incidents of domestic violence and assaults, he said.

Sales have also climbed in other jurisdictions.

The Liquor Control Board of Ontario said sales were up in March, with the most significant increase happening between March 12 and March 24. Sales have since returned to normal volumes, the agency said. (Exact figures were not provided.)

The Saskatchewan Liquor and Gaming Authority reported 4.8-million litres sold in March and April this year, versus 3.6-million litres for that time period in 2018 and about the same in 2019. (Dollar values were not provided.)

Also in April, the CCSA published a report on the risks of keeping retail liquor stores open during a pandemic. Those risks increased alcohol consumption, a rise in domestic violence and long-term costs for governments.

But there are also risks in closing liquor stores, the report noted, including involuntary withdrawal for those with alcohol-use disorders, stockpiling and reduced profits for governments.

The report said governments should boost public education around drinking and provide more funds to groups that support victims of domestic violence. 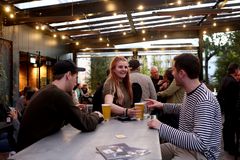 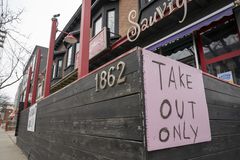 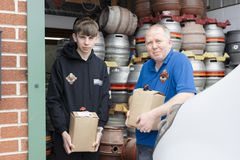