British Columbia is instructing its postsecondary schools and private language and career colleges to stop accepting large cash payments for tuition or other fees, part of the province’s continuing push to crack down on possible money laundering.

Advanced Education Minister Melanie Mark announced Tuesday that she has recently sent letters to the heads of 25 public universities and colleges as well as almost 350 private institutions giving them a month to review their financial policies to ensure students can’t pay for tens of thousands of dollars in tuition with cash.

The government is also going to audit any existing cash rules in these schools, which the province estimates have a total student population of roughly 500,000, to help close several loopholes in the sector identified in an independent money-laundering report released earlier this month, the minister said.

She said she would confer with her colleague, Minister of Education Rob Fleming, to see whether this ban should be extended to the province’s private elementary and high schools, which can charge upward of $70,000 for an international student housed on campus.

Neither Ms. Mark nor Attorney-General David Eby, who joined her at a news conference in Victoria, could provide figures as to how widespread this issue may be. Mr. Eby noted these schools do not report suspicious transactions to the federal anti-money laundering watchdog.

The allegations of money laundering in the schools stem from the recent review – by former high-level Mountie Peter German – of money laundering in the real estate, luxury car and horse racing sectors. Members of the public used a tip line to warn Mr. German’s team of risks in other industries, including how some international students sign up for programs, pay their fees in cash and then cancel before classes begin. They then get a refund cheque.

“On a recent occasion, one college was faced with a student who was required to pay a charge of $150. The student attended with $9,000 in cash in a duffel bag and asked to deposit that amount minus the $150 owing. In effect, the institution was being asked to act as a bank,” Mr. German’s report stated.

The report also detailed allegations of how “some overseas students will appoint an educational agent, a nominee or a proxy to register on their behalf, pay their tuition and later withdraw and collect their refund.”

Ms. Mark said the province will have a better idea of how widespread an issue these payments are once it hears back from the postsecondary education sector.

The University of British Columbia, the province’s largest university, said this problem is not an issue on its campuses.

“We have not accepted cash for tuition at UBC for more than 10 years,” senior spokesperson Kurt Heinrich said.

Robin Hemmingsen, principal of Columbia College, which offers a transfer program to B.C.'s public universities as well as English-language classes, said her not-for-profit institution has been catering to international students for most of its 80 years and does not accept cash from new students. She noted all aspiring students encounter a thorough vetting process.

Mr. Eby said Tuesday’s announcement is part of this government’s continuing work to systematically implement the recommendations from the reports of Mr. German as well as former deputy provincial attorney-general Maureen Maloney. Ms. Maloney’s report, also released earlier this month, said money laundering could have amounted to $7-billion in B.C. in 2018 and an estimated $5-billion could have been washed through the real estate sector last year.

Two weeks ago, B.C.'s NDP government called a public inquiry into how money laundering has corroded the provincial economy, inflated B.C.'s housing market and contributed to the deadly opioid crisis.

Editor’s note: An earlier version stated Columbia College’s university transfer program was two years long and that it only accepts cash from students who have been at the school for that period. This version has been corrected.

Crackdown on money laundering does not include federal public inquiry, Bill Blair says 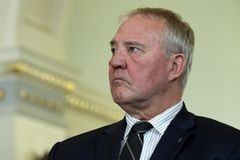 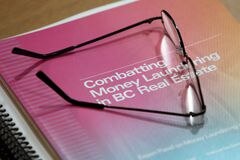 B.C. is leading the way on money laundering. The rest of the country should follow 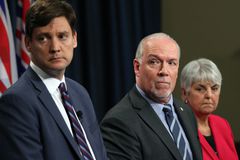