The City of Burnaby, B.C., whose mayor is sharply opposed to the expansion of the Trans Mountain pipeline, is under pressure from homeowners near a pair of protest camps.

The pressure has come as the city, which is the end point for the pipeline from the Edmonton area, has taken court action against the pipeline, and Mayor Derek Corrigan has said the city won’t cover RCMP costs for dealing with protesters, who have targeted a tank farm from which bitumen is loaded into tankers.

In a recent submission to city council, area resident Darlene Johnston tabled a petition with 176 residents’ signatures and expressed concerns about traffic, fire safety, litter and the “negative impact of the protest activities on adjacent property values.”

Ms. Johnston, speaking for residents, called for the camps to be torn down – a view shared by others in the area.

On Sunday, Ms. Johnston, who has lived in Burnaby for 46 years, said she stands by that view.

“Burnaby is doing nothing. They say they are monitoring the situation, but that means nothing to us,” she said in an interview.

“The city is turning a blind eye to bylaws being broken because the mayor is opposed to the pipeline,” said Barbara Spitz, a former school trustee who lives in the area.

There are two camps – Camp Cloud and Watch House – bases for protest against the pipeline expansion, which would triple the amount of diluted bitumen and other oil products moving from Edmonton to the area around the camps.

Mayor Corrigan did not respond on Sunday to calls seeking comment on the situation.

City manager Lambert Chu said in an interview that the city continues to grapple with the issues raised by residents, as well as balancing the city’s political position with the concerns of neighbours to the camps with the rights of protesters.

“There are still some outstanding items that we want to work toward,” he said.

Mr. Chu said the situation is unprecedented in his 28 years working for the city, noting that there was an isolated protest in 2014 against exploratory work on pipeline expansion, but nothing like the consequences of the two current camps.

“This is a new experience for the city of Burnaby,” he said. “This is going to go on for a long time, and it’s not something we have experienced in the past.”

Will George, a leader at the Watch House camp, said on Sunday that there are divisions between residents and the camps, but all sides are united in opposition to the pipeline expansion and its consequences.

“I would say it’s a work in progress,” Mr. George said, when asked to describe the status of efforts to reach a consensus between the protesters and area residents. “We’ll have to learn to get along some way and somehow.”

He said he never allows more than a dozen people to be in his camp at any given time.

Mr. Chu said he is mindful of the city’s advocacy against the pipeline while working through issues around the camps.

“We try to separate the city’s position with respect to opposing the pipeline and dealing with the protests and the resident concerns,” he said.

The City of Burnaby has announced plans to ask the Supreme Court of Canada to assess a lower-court decision that denied the city leave to appeal a National Energy Board ruling that allows Kinder Morgan to bypass local laws during construction of the pipeline expansion.

Ottawa is putting up $4.5-billion to buy the existing pipeline and is taking on financial responsibility for the pipeline expansion, which has been projected to cost $7.4-billion. 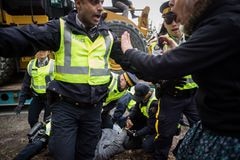 Opinion
From the comments: On the purchase of the Trans Mountain expansion project
May 31, 2018