The City of Burnaby, where protests and arrests have been taking place over work under way to expand the Trans Mountain pipeline, has ruled out paying policing costs related to managing the activism, says its mayor.

Like many B.C. communities, Burnaby is policed by the RCMP, and is normally on the hook for expenses, but Mayor Derek Corrigan – a vocal critic of the pipeline project – says he is drawing the line at overtime and other RCMP costs related to Trans Mountain as a project the city opposes.

“We’re not paying for the additional policing costs that are being accumulated as a result of the protests at the Trans Mountain project,” Mr. Corrigan said in an interview. “I don’t think there is anybody in the Western world who doesn’t know now that Burnaby is not paying.”

He casts the position as a reflection of Burnaby’s opposition to the project as well as the view that the Trudeau government, which approved the project, should be picking up the costs to deal with protests against it.

This isn’t the first time the issue has come up. The B.C. government says there is an outstanding $800,000 bill for policing 2014 protests related to the project that “remains in dispute,” according to a statement from the provincial Ministry of Public Safety and the Solicitor-General.

“The province is aware of Burnaby’s views on paying for these policing matters and we confirm there is an outstanding non-payment with respect to 2014,” said the provincial statement issued by Colin Hynes for the Ministry of Public Safety.

In their statement, the provincial public safety and Solicitor-General’s ministry said the Police Act in B.C. compels municipalities with populations over 15,000 to pay for the cost of policing within their boundaries. “This includes the cost of policing matters related to civil disobedience.”

However, the ministry said the dispute will not affect policing. “It is important to note that regardless of any disagreement over funding, policing services will continue uninterrupted and will be unaffected by any funding disagreement.”

Ironically, British Columbia’s NDP government has been sharply opposed to the expansion of the pipeline – a policy that has pitted them against the NDP government in Alberta, which is a proponent for the project.

Mr. Corrigan’s stand comes amidst increasing protests over the project. According to the Burnaby RCMP, 54 demonstrators against the project were arrested on Saturday for breaching a court-ordered injunction that prohibits protesters from coming within five metres of a pair of terminals in Burnaby operated by project proponent Kinder Morgan. Last Friday, federal Green Party Leader Elizabeth May and NDP MP Kennedy Stewart were arrested in protests.

The Trans Mountain expansion project, which has been approved by the federal government, will triple the capacity of the pipeline to about 900,000 barrels from 300,000. In recent weeks, one protest drew more than 5,000 people – and a police presence to manage the gathering.

Ali Hounsell, a spokesperson for the Trans Mountain project, said in a statement issued Sunday that “Trans Mountain’s view is that policing is a local government cost. “

Mr. Corrigan said the Mounties have told him they may take the matter to dispute resolution. While he said he has no details on that process, an RCMP spokesperson in B.C. pointed out there are provisions for working through disputes in the service agreement on municipal policing in B.C.

The mayor also said he is skeptical about RCMP assurances that dealing with the protests won’t distract from routine policing needs in Burnaby.

“They’re telling me, no, they are not diminishing any of the resources that are available to the community. But I can’t help but think this takes a toll in being able to deal with these issues,” Mr. Corrigan said. “While I am being assured that it is now, I am suspicious that it is.”

In a series of e-mail responses to Globe and Mail questions on the issue, a spokesperson for the RCMP E-Division covering B.C. said the force is dealing with protests now and looking to eventually deal with costs.

“The RCMP goal for any demonstrations is to ensure that they take place in a peaceful, lawful and safe manner. We will deploy the resources necessary to accomplish this,” Sergeant Janelle Shoihet said in an e-mail.

Sgt. Shoihet said the Burnaby RCMP don’t have contingency funds for their responsibilities but, rather, respond to calls for service and rolls salaries, expenses and other costs into an annual policing budget for the detachment.

Mr. Corrigan said the protests against Trans Mountain are going to get worse.

“This is the overture to what ‘s going to happen later on. I anticipate there will only be an escalation of the protests over the next months. This problem is only going to become progressively worse.” 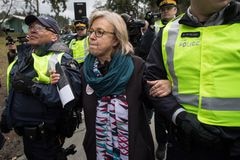 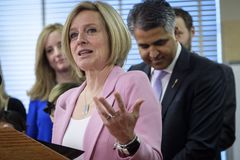