At 8 p.m. in Toronto, Andy Truong’s eight-year-old son joins his classmates in Beijing online for the start of school. The Grade 3 student stays up until 1 a.m. every weekday and has to skip his afternoon classes to get some sleep.

“Our daily schedule is vice versa, and it’s all messed up,” said Mr. Truong, who moved to China from Toronto in 2001.

Mr. Truong is among many Canadian expats who planned a short stay in Canada before the coronavirus outbreaks in China turned into a global pandemic. In late March, as China’s domestic cases were decreasing and COVID-19 was spreading rapidly in other parts of the world, Beijing decided to temporarily suspend entry by most foreign nationals.

Though life is gradually returning to normal in China, these stranded expats see no normalcy in sight. Instead, they continue to adjust to a different time zone for work and school; some are suffering financial loss due to closed businesses, and others are at risk of losing their jobs and life in a country they call home.

“Everyone is waiting … hopefully that [China’s] foreign affair will open up its border,” Mr. Truong said.

In British Columbia, Alissa Peacock brought her children from Beijing to visit her parents in Langley in mid-January. The three were supposed to fly back to China on Jan. 31, but the cancelled flight and fast-evolving situation forced them to stay put.

“I haven’t seen my husband, and the kids haven’t seen their dad over four and half months, and that’s difficult,” said Ms. Peacock, who works in China’s health care sector.

“We’re living day by day, not knowing ... when can we move on with our lives and get back to normal.”

She is part of a WeChat group of more than 200 Canadian expats seeking to return to China.

“All the people on this group are just waiting, hoping that something can happen.”

China has been in talks with some nations to establish fast-track procedures that allow travel by business and technical personnel, and has so far reached agreements with several countries, including South Korea, Germany and Singapore.

Ms. Peacock said many in her chat group hope a similar channel will be created between China and Canada.

According to a statement from the Chinese embassy in Ottawa, the “fast lanes” with South Korea and Germany were launched to facilitate necessary business and official exchanges between the two countries.

The embassy did not say when China would consider relaxing its borders for Canadians, but noted Beijing is ready to explore similar arrangements with other countries in order to resume necessary people-to-people exchanges and provide support for the resumption of work.

A spokesman for Global Affairs Canada said there have been no discussions about a fast-track arrangement for Canadian business travellers wanting to get into China.

Noah Fraser, managing director of the Canada China Business Council in China, said although his group has been lobbying China to allow a fast track for Canadians, he is not optimistic anything will happen soon.

”I don’t predict a very fast opening. But what I would advise our members to do is to hunker down and try to create a livable situation for the next several months.”

Some expats, including Ms. Peacock, expressed concern that the latest ruling in the case of Huawei executive Meng Wanzhou could create more barriers for them to go back.

“What’s going to happen with the China-Canadian relationship?” Ms. Peacock said. “People feel a little bit more worried about that. Does it turn into a political situation?"

Mr. Fraser said the issue is not a retaliatory measure in any way.

“This is not about Canada-China relations. … It’s about commerce, it’s about trade.”

Those nations to which China has opened its doors are all heavily invested in the country, he added.

“We don’t have the critical mass of Canadians that are operating here. We don’t really qualify. And that goes for a lot of countries around the world. It’s not just us.”

The Chinese government is allowing certain categories of people to come back in, he said, such as key executives or specialists. But, he noted, the many Canadians who teach in China have been forgotten.

“They reopened all the schools, all the international schools, but the teaching population is not back.”

He added: “It’s a really large community that is very hardworking, in a very big part of the fabric here but does not meet those eligibility criteria. So it’s tough.”

Jessie Zhao, who works at an international preschool in Beijing, is heading into a fourth month of being stuck in New Brunswick.

Although she has managed to work remotely, she feels uncertain about the renewal of her contract, which is set to end in a month.

“If we are unable to return to China in the next few months, there is a lot of ‘our life in China’ that will need to be moved over,” she wrote in an e-mail. 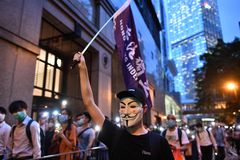 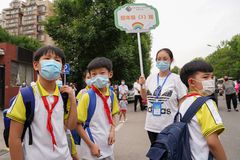 Coronavirus information
The Zero Canada Project provides resources to help you manage your health, your finances and your family life as Canada reopens.
Visit the hub
Follow Xiao Xu on Twitter @xiaoxuyvr
Report an error Editorial code of conduct
Due to technical reasons, we have temporarily removed commenting from our articles. We hope to have this fixed soon. Thank you for your patience. If you are looking to give feedback on our new site, please send it along to feedback@globeandmail.com. If you want to write a letter to the editor, please forward to letters@globeandmail.com.
Comments