Corky, a northern resident killer whale born off the B.C. coast, marked its 50th year in a concrete tank in December.

Paul Spong, who has spent decades studying the whales in Corky’s home waters, lit a candle to mark the occasion. Dr. Spong, who has campaigned for Corky’s release for 35 years, still has a recording of Corky’s vocalizations days after its capture near Pender Harbour on the Sunshine Coast.

At the time, the whale would have been calling to its family – each pod of the northern resident killer whales has its own dialect, and the close-knit families are rarely out of communication with each other. But then, Corky was loaded on a truck and taken away to serve as what its owners at SeaWorld San Diego describe as an “ocean ambassador."

For Corky and other whales living in captivity, there is fresh hope that they may yet experience some freedom.

In the next few weeks, the Whale Sanctuary Project expects to announce the location of its first permanent cetacean retirement home, which they believe will be the only facility of its kind in North America. It will provide an opportunity for some long-time inmates to end their days in a natural habitat.

The project is headed by marine-mammal scientists who want to build a bridge to end captivity for belugas and orcas. The reserves are to be located in a protected bay or cove, netted off so that these animals, which are not likely candidates for release into the wild, or which need rehabilitation before being released, would get to experience the ocean in safety.

There are four sites on the short list: Two in Nova Scotia, one in British Columbia and one in Washington State. The minimum size for a seaside sanctuary would be roughly 300 times larger than the average display tank at a marine park.

“Right now, we think that we probably will start in Nova Scotia,” Lori Marino, a neuroscientist who has spearheaded the sanctuary project since 2011, said in an interview while visiting Nova Scotia in mid-December for a final site inspection.

“That doesn’t mean we’re giving up on the West Coast. But we have to start somewhere.”

Dr. Marino is an expert in animal behaviour and intelligence who, like Dr. Spong, began her research on the brains and cognitive abilities of whales and dolphins with captive animals.

Also like Dr. Spong, who worked with orcas in the Vancouver Aquarium in the 1960s, what she learned from her research persuaded her that these animals should not be kept in tanks. “I did studies of mirror self-recognition in bottlenose dolphins, I started to think about what it was like to live in a tank when they are so self-aware," she said. She began to research how the animals got there, and what their living conditions were doing to them.

“The picture was not pretty. I decided I really could not continue to support keeping animals in tanks like this."

Her group has been fundraising for the estimated $20-million to establish a site, and have scouted thousands of potential locations.

However, they are still missing one thing: Whales.

So far, no facilities that keep whales for entertainment, such as MarineLand Park in Niagara Falls, have agreed to release their occupants to retire.

“The habitats at SeaWorld and other professionally accredited and certified facilities are the safest known place for marine mammals living in human care,” David Koontz, a spokesman for SeaWorld San Diego, said in a statement. “It would be irresponsible to risk the health of these magnificent animals by physically moving them to an experimental, and unproven, dangerous environment.”

But Dr. Marino expects that if they build it, these marine parks will come around.

“We are hoping that places like SeaWorld, places like MarineLand, come to see that there’s a real benefit to collaborating with us on creating the sanctuary, because a lot of people are starting to turn against these parks, because they don’t want to see these animals performing tricks,” she said.

“We want to move into the future together. It’s not about closing them down, it’s about the best thing for the animals,” she said. “It’s up to us to show how serious we are.”

Meanwhile, if the Whale Sanctuary Project starts out on the East Coast, Dr. Spong has not stopped working to find a way out for Corky. After leaving the Vancouver Aquarium, he established the research station OrcaLab on Hanson Island, near the northern tip of Vancouver Island, to study northern resident killer whales in the wild.

He initially hoped Corky could be returned to the wild, but that looks unlikely now. The whale is 54 years old and could live for decades yet, but after so many years in captivity, he says the best scenario would be an ocean-based facility where Corky will receive care from whale experts.

He is preparing Corky’s own sanctuary site in Double Bay, on Hanson Island, hoping for a change of heart from SeaWorld.

“She will swim in ocean water again, and though still confined, her family will be able to visit,” he wrote in a blog on the 50th anniversary of Corky’s capture. “It can happen and I believe it will.” 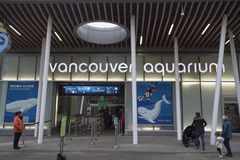 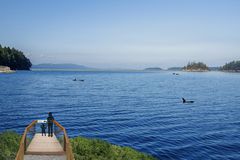