Canadian supporters of Hong Kong rallied throughout the weekend as another massive protest against a controversial extradition bill gridlocked Hong Kong streets and forced an apology from the city’s chief executive.

On the steps of the Vancouver Art Gallery, hundreds of students donned yellow hard hats and held up umbrellas – items that Hong Kong protesters have used to protect themselves from the rubber bullets, tear gas and pepper spray deployed by police.

In Toronto, about 2,000 black-clad supporters marched from city hall to the Hong Kong Economic and Trade Office, where they staged a sit-in, heard from speakers and paid respects to a 35-year-old man who died after falling from scaffolding during protests in Hong Kong on Saturday night.

Fenella Sung, convener for the Canadian Friends of Hong Kong network, which drew together about 1,500 people outside the Chinese consulate in Vancouver on Saturday, said the strong showings reflect recognition of the wide reach the bill would have.

“It threatens the rule of law and the civil liberties that Hong Kongers have enjoyed,” Ms. Sung said in an interview on Sunday. “And, it places a dagger above the head of everyone that is going to pass through, live or work in Hong Kong.”

The bill would allow authorities in mainland China to legally seize those they determine to be fugitive criminals to face justice in courts controlled by the Chinese Communist Party. It would significantly compromise the independent judiciary Hong Kong had been promised under the “one country, two systems” framework.

Hong Kong chief executive Carrie Lam offered an apology on Sunday night, saying in a statement that she accepted public criticism with sincerity. The government announced Saturday it would suspend the bill, but protesters say they will not back down until it is permanently withdrawn.

There are about 300,000 Canadian citizens living and working in Hong Kong, according to Global Affairs Canada.

At a prayer rally outside the Chinese consulate in Vancouver on Sunday, hundreds of people sang hymns and read passages from the Bible. They displayed photos of Hong Kong police bloodying protesters and carried the umbrellas that have become symbolic of the movement’s peaceful protests.

“This is not a political event, but one of faith,” said a man addressing the crowd from the back of a flatbed truck.

Gloria Fung, president of the Canada-Hong Kong Link non-profit organization behind the Toronto demonstration on Sunday, said while many participants were either born or raised in Hong Kong, many others were locals who share the same concerns.

“They see that this is not just a Hong Kong issue, this is an international issue,” she said. “If this bill is ever enacted, it will allow China to arbitrarily to arrest anybody in Hong Kong, or who transits through Hong Kong.”

Canada has strongly condemned China for what it calls the “arbitrary arrest” and detention last December of Michael Kovrig, a former diplomat who has been accused of gathering state secrets and intelligence for overseas entities, and Michael Spavor, an entrepreneur who helped people travel to North Korea.

“We don’t want the kind of fear that every time we pass through Hong Kong, we could see a fate like [Mr. Spavor or Mr. Kovrig],” Ms. Sung said. “Every one of us could become Michaels if this extradition bill is passed.” 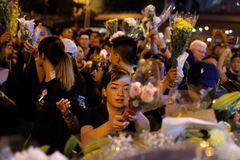 Thousands expected to protest in Hong Kong demanding leader to step down
June 15, 2019 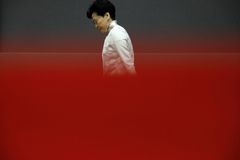 Hong Kong puts controversial bill on hold, but protesters vow to be back on streets
June 15, 2019 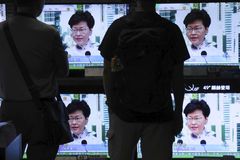