Members of Canada’s Chinese community have been gathering medical supplies to donate to health-care workers battling the novel coronavirus, saying they are responding to requests from front-line workers looking for personal protective equipment.

They say they are being asked for equipment such as surgical masks, N95 masks, face shields and gowns.

British Columbia’s Public Health Officer Bonnie Henry said Monday that she was not aware of shortages of such supplies, but two days later, she acknowledged the province is currently at a “tenuous level” of personal protective equipment.

“It’s a challenge that we have nine long-term care facility outbreaks where additional protections are needed in those facilities," Dr. Henry said Wednesday in her daily media briefing. “And then we now have an increasing number of people in hospital and [we are] going through way more personal protective equipment than we expected."

She added the province is now looking to increase stockpiles, including considering alternative supplies from around the world.

The shortage of gear pushed health-care workers, through social media, to call on dentists and members of the public to make donations. “To our dental colleagues: Do you have surpluses of face masks or other PPE? ... Us front-line health-care workers are in desperate need of them,” one post says.

Vancouver dentist Patrick Wu began donating medical supplies after receiving calls and messages from physicians and nurses. “They feel unsafe at their workplace," he said.

As dental offices have suspended non-essential services, Dr. Wu collected items such as masks, gloves, surgical gowns and shoe covers from his and his colleagues’ clinics. He then delivered them to hospitals in Vancouver and area last week.

After an article about his efforts was published in a Chinese-language newspaper over the weekend, more health-care workers reached out to him, he said, prompting him to establish a group to collect more resources.

“It is unbelievable; it’s overwhelming – the number of nurses and doctors [who] have asked us for donations. ... I only have so little to give so that urged me to quickly form this group.”

Dr. Wu said in the past few days many people had approached him and wanted to contribute, including a Vancouver dental laboratory.

Businesswoman Caryn Zhang has been mobilizing members in the Chinese community to give away medical supplies.

The equipment has come from local residents and Chinese Canadians who had gathered it to donate to health-care workers in Wuhan, China, when the crisis first became public in January. Those supplies are no longer needed as urgently overseas, as China begins to emerge from the worst of the outbreak.

Ms. Zhang said her group has also asked Canadian citizens and permanent residents who are returning to Canada from China to bring with them as much as they can. As well, she said the group also has connections with factories in China that produce medical masks.

“We just want the doctors to be safe,” she said. "If [health workers] around us collapse, then this country will be devastated.”

One emergency doctor working in a hospital within Fraser Health Authority said he had to buy himself masks from a hardware store to ensure his safety.

The Globe and Mail has granted the doctor anonymity because of his concerns he would face repercussions from his employer for speaking out. He said he isn’t sure whether his hospital has sufficient supplies in stock but said the essential equipment is not in the hands of front-line health workers.

Dr. Henry said this week that donations of medical supplies from groups could also be a challenge for a health-care setting.

“The challenge we have is that the equipment, the personal protective equipment, may not be the right thing for a health-care setting, and that has happened in a couple of cases where people have been well-meaning, but have delivered things that were inappropriate,” she stated. 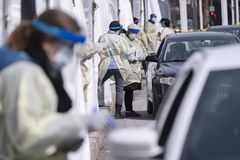 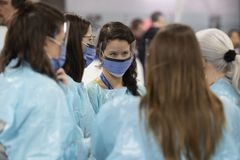