Vancouver feels like a lushly green city to its residents in comparison with many older cities elsewhere.

But a new, first-ever study has found only about third of the land in Metro Vancouver’s urban areas has tree cover and that amount is projected to decline by another 4 per cent – 3,000 hectares – in the next 20 years, if development continues as is.

And Metro Vancouver planners are recommending that cities aggressively look for ways to plant trees in order to make up for the losses as the region continues to gain new residents and they are packed in ever more tightly, because trees – the bigger, the better – help cool streets, mitigate stormwater floods and act as carbon-storage units.

“It’s not inevitable that density means no trees,” said Josephine Clark, an environmental planner with the region who oversaw the study, which was presented to Metro Vancouver’s planning committee. “There are ways of doing it where we don’t have to lose them.”

In fact, the study showed that most of the tree loss in the past 50 years has been in relatively low-density sites – single-family house lots – as builders increasingly opted for bigger houses, garages, driveways and patios.

According to the study, single-family developments used to result in about 36 per cent tree canopy in the 1970s. By 2000, the rate was down to 18 per cent.

That “indicates that fewer, or smaller, trees are being retained or planted during construction of low-density housing over time,” the study noted.

In contrast, low-rise apartment buildings and taller condo towers, at least those built until very recently, were often constructed on large lots where builders put in lawns and several trees around them, making them greener than some single-family areas.

That is likely changing, said Ms. Clark, as apartment buildings are more and more taking up the whole lot.

Some cities have already done their own studies measuring tree canopy in recent years and found some startling results.

Surrey’s tree cover in the area (defined as being inside what Metro calls its “urban containment boundary,” which excludes protected agricultural land and defined greenbelts) fell from about 34 per cent in 2000 to 28 per cent by 2013.

The City of Vancouver went from around 20 per cent in 1995 to 18 per cent in a 2013 study, although Ms. Clark’s report pegged the cover at around 23 per cent, putting Vancouver in the mid-range compared with a low of 11 per cent in Richmond and a high of 64 per cent for West Vancouver.

Some of them, especially Vancouver, New Westminster and White Rock, have adopted energetic new efforts to ensure that trees aren’t lost or that they are replaced if they are taken down because they’re diseased or in the way of new development.

Surrey, where Councillor Steven Pettigrew routinely expresses dismay about the number of trees coming down in the dozens of developments the city approves every year, has a policy that it is trying to maintain tree cover at 30 per cent, with a requirement that there be one-to-one replacement for each black cottonwood or red alder taken down on private property.

And Nadia Chan, the manager for trees and landscapes in Surrey, said the city is undergoing a review of its tree-protection bylaw.

Many residents, responding to a Globe request on Twitter for stories, replied with tales of lengthy negotiations with their city officials over attempts to take down a single tree.

Sherida Charles, a New Westminster resident with a 38-metre poplar on her property that is three-metres in diameter, said she tried to get city permission to take it down because she and her husband are worried about it falling in a windstorm.

But she was told by city officials that it was very unlikely she would ever get a permit, so she’s resigned for now – and sees the benefit.

“I love trees and that tree is like a high-rise building for animals, squirrels, birds.”

Ms. Clark said the public needs to get more information about how valuable trees are, especially larger ones.

“We need people to value them and the bigger, the better. Big, mature trees are the powerhouses.”

Opinion
In search of higher ground: The world’s cities must take action against rising sea levels, before it’s too late
September 9, 2019 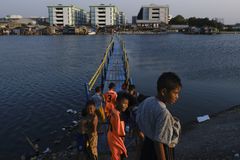 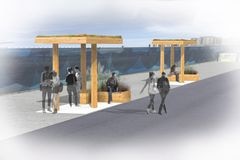 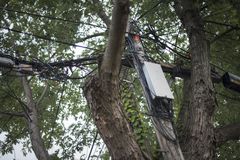