Coastal GasLink has rejected an alternative pipeline route, saying it is committed to its chosen path for crossing the Wet’suwet’en Nation’s unceded territory in northern British Columbia.

Staff with the Office of the Wet’suwet’en, a non-profit society governed by hereditary chiefs who oppose the pipeline, first proposed moving a segment of the route in May, 2014, to a location still within the Indigenous group’s traditional territory, according to regulatory filings and internal documents.

Paul Manly, the Green Party MP for Nanaimo-Ladysmith on Vancouver Island, met with hereditary chiefs last month in Smithers, B.C. After the meeting, Mr. Manly drew attention to what’s called the McDonnell Lake option, which would cross south of Smithers.

Protests have escalated and spread across Canada in solidarity with Wet’suwet’en hereditary chiefs, who are battling the $6.6-billion project that would transport natural gas from northeastern B.C. to Kitimat on the coast. Over the past week, anti-pipeline opponents have increasingly asked why Coastal GasLink dismissed the alternative idea nearly six years ago.

Coastal GasLink, in a statement posted on its website late Friday night, said sticking with the current route makes environmental and economic sense, and there is no reason to revive the alternative that goes near McDonnell Lake. “Grading, clearing and site preparation work is well advanced across the route with pipe delivery ongoing and mainline construction commencing this summer,” said Coastal GasLink, which is owned by Calgary-based TC Energy Corp.

Tensions have been rising between Coastal GasLink and Wet’suwet’en hereditary chiefs since Dec. 31, when a B.C. Supreme Court judge extended an injunction against opponents of the project who set up barricades along a logging road near Houston, B.C.

Justice Marguerite Church said in her ruling that Coastal GasLink considered the alternative route, but the project’s managers "ultimately rejected it for various reasons, including the inappropriateness” of laying down a large-diameter pipe under the McDonnell Lake option, extra costs and the desire to be farther away from communities. Those places include Houston, Smithers and Terrace, B.C.

Over the course of five days in early February, RCMP moved in on the logging road to enforce the court injunction to restore Coastal GasLink’s access to the final two sections of the route. RCMP arrested 28 people along the road. Coastal GasLink said its contractors have regained access to get to work sites.

Coastal GasLink started preliminary work on its 670-kilometre route in early 2019. About 190 kilometres cross the Wet’suwet’en’s unceded territory, or 28 per cent of the route from northeast B.C. to Kitimat, where LNG Canada is building its $18-billion terminal that is scheduled to export liquefied natural gas to Asia by early 2025.

The B.C. and federal governments support the pipeline, as do all 20 elected First Nation councils along the route. But a group, led by eight Wet’suwet’en hereditary house chiefs, has led a vocal campaign to oppose the pipeline’s construction, saying hereditary leaders have jurisdiction over their territory outside of federal reserves, not elected band councillors.

Hagwilget, which has the sixth elected band council within the Wet’suwet’en Nation, is a reserve that includes Gitxsan members. B.C.’s environmental regulator excluded Hagwilget from its list of Indigenous groups primarily affected by the pipeline project and Coastal GasLink did not sign an agreement with Hagwilget, saying the regulator’s review process focused on the 20 reserves located along the pipeline corridor.

Rick Gateman, who served as Coastal GasLink’s president from 2012 until early 2019, warned last year that any delay to even one section of the pipeline would place the entire project at risk.

On Friday night, Coastal GasLink released an internal letter dated Aug. 21, 2014, from Mr. Gateman to Debbie Pierre, executive director of the Office of the Wet’suwet’en.

Mr. Gateman estimated the McDonnell Lake rerouting would add as much as 89 km to the pipeline and cost up to $800-million extra to construct, as well as take one year longer to build.

Mike Ridsdale, the Wet’suwet’en Nation’s environmental assessment co-ordinator, expressed his concerns to the BC Environmental Assessment Office in a letter on Oct. 3, 2014, but the provincial government approved Coastal GasLink less than three weeks later. “The Wet’suwet’en have offered the province on numerous occasions to help remedy this matter to no avail,” he said in his letter to the environmental regulator.

Mr. Ridsdale referred to a 122-page rights and title report prepared by the Office of the Wet’suwet’en’s natural resources department. The report said rerouting with the McDonnell Lake option “would avoid major cultural values to the Wet’suwet’en” such as sensitive land and waterways.

The logging road near Houston includes the territory of Dark House, one of 13 Wet’suwet’en hereditary house groups, which in turn falls under five clans.

The Office of the Wet’suwet’en serves as the umbrella organization for the house groups, though Coastal GasLink said it made special efforts to deal separately with Dark House under Gilseyhu, one of the five hereditary clans.

In a 2018 letter to the BC Oil and Gas Commission, Mr. Ridsdale said Gilseyhu held a feast in 2011 to oppose all pipeline routes through the clan’s territory. “There is too much at stake for our children to allow any pipeline permit activity,” he wrote. 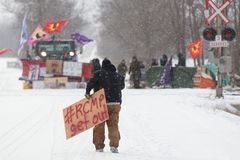 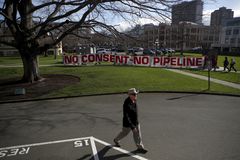 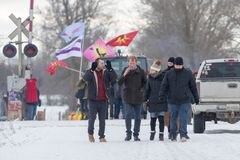