Andy Dockrell was such a stickler for the rules that he would often break out the Canadian Pacific Railway regulations to chide co-workers on how to do everything by the book.

That diligence was a major reason Chris Dyson was so shocked on Monday when he heard that his former colleague was the locomotive engineer driving the grain train that crashed in the Rocky Mountains near Field, B.C., killing Mr. Dockrell, conductor Dylan Paradis and trainee Daniel Waldenberger-Bulmer.

“You would maybe ask him to cut corners on something. ‘Hey, can we do this? Can we do this one faster?’ and he’d say ‘No.' He’d always have his rule book out instructing guys on how to do it properly," said Mr. Dyson, a former conductor and locomotive engineer with CP from 2008 to 2016. “If anybody was going to follow the rules, it was going to be him.”

As authorities investigate what led to the horrific crash, friends and family are mourning a trio of men from Calgary who lost their lives on a steep stretch of the rail line known to employees as being one of the most challenging in the country, especially during winter.

Mr. Dockrell, whose family could not be reached by The Globe and Mail, was a passionate evangelical Christian who loved talking about his beloved Boston Bruins during downtime on the trains, Mr. Dyson said. Perhaps his one deviation from normal operating procedure was playfully tweaking the end of the names of places they rolled through over the radio, Mr. Dyson said.

“He was a great guy,” said Mr. Dyson, who now works in B.C. in the film industry.

Mr. Dockrell was the most senior of the crew, followed by Mr. Paradis, a father of two who was “quick witted, loving, intelligent, gracious and grounded,” according to his wife, Jennifer Paradis.

“He was a family man. The sun would rise and set with his daughters, and I was lucky to feel his love everyday. I will forever be grateful for our beautiful marriage, and he will be missed terribly by his loving family and friends,” Ms. Paradis said in a text statement.

Marie Armstrong, a friend of Ms. Paradis, said that Mr. Paradis was an “amazing person.”

“He loved his wife and children more than anything, he was hardworking, kind and had a great sense of humour,” she said Monday evening.

A GoFundMe page has been started to support the family of Mr. Paradis, who had worked at the rail line for just over a decade, raising about $9,000 by Tuesday afternoon.

Daniel Waldenberger-Bulmer had been working at CP for only three months and leaves a twin brother named Jeremy, who also worked as a conductor for the company, and had been playing host to his brother at his Calgary home.

“My 19-month-old daughter is walking around saying ‘Unco Dano,’ as a constant reminder he is still with us," Jeremy Waldenberger-Bulmer said. "Myself, my wife Merika and our daughter Tenley feel an emptiness in our home that is indescribable. He will truly be missed.”

Daniel was a keen golfer whose dream was to attend the Phoenix Open golf tournament in January next year, his brother said.

“He always lived his life to the fullest. He has so many friends that are going to miss him,” Jeremy Waldenberger-Bulmer said in a message to The Globe and Mail via Facebook. “He was excited to have a life of railroading. He was loving it and knew he would make a lifetime career out of it. We had big plans of living out our careers with CP Rail and retiring together to golf all over the world." 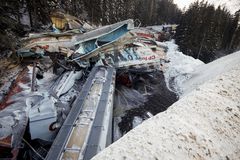