One Vancouver school trustee says she fears that a precedent set this week – when the Vancouver School Board agreed to sell underground space on a school site to BC Hydro for an electrical substation – will result in the district being forced to sell more land to pay for needed schools.

“I feel that it’s a very slippery slope, that next it will be, ‘Now, we really feel you should sell Kingsgate Mall for a school at Olympic village,’ ” said Carrie Bercic, a OneCity school trustee who was one of only two among eight votes to oppose the deal in a vote earlier this week. “I really don’t know where that stops.”

BC Hydro had asked to buy space under the playing fields at Lord Roberts School Annex in the West End for a new substation, saying it was the best option in the crowded downtown peninsula for expanding its electrical system to serve a growing number of customers.

The Crown agency has promised to pay a “fair-market value” trustees say is enough to cover the cost of building two new schools, one a replacement for the annex, another a new school in Coal Harbour.

Many West End residents were vehemently opposed to the idea, concerned about the dangers of the station’s electromagnetic field and resentful that the neighbourhood was being asked to consider the deal in order to get a new school.

Most trustees voted in favour of the sale, saying new schools are desperately needed in the West End and that they’ve been told the Education Ministry has no plans to fund any new construction there for at least a decade.

Trustees aren’t allowed to say what kind of money BC Hydro has offered in closed negotiations with the board. But the most recently completed school in Vancouver, Crosstown Elementary near Chinatown, cost $19.7-million for a building that has room for 500 students. The province covered $15.4-million and the board paid for the remainder.

Even one trustee who voted for the agreement says she worries that pressure to sell off land in future could be a “challenge.”

“I don’t want it to become the new normal,” said Green Party representative Janet Fraser, also the board chair. “We do have to be very careful as a school district to be thoughtful about how we work with the ministry.”

However, she said she voted in favour of the sale because she felt the board had no choice.

Ms. Fraser said the ministry has clearly indicated it doesn’t have a new downtown school on its school-construction list for at least the next 10 years.

“We think it’s a priority, but obviously they don’t. We can disagree and then we can get nothing.”

Non-Partisan Association trustee Lisa Dominato, however, said she thinks the board is not going to get squeezed again like this.

“This was a unique circumstance. I don’t believe the ministry is going to go down that path.”

Ms. Dominato said that her concerns about environmental impacts of the substation were alleviated by extra protections the district had asked for.

BC Hydro had already agreed the substation would go under the playing-field portion of the site, not under any future school.

But trustees also asked that there be continuing monitoring of electromagnetic waves both on the field and in the school, and that the underground cables running to the station be encased in steel and embedded deeper than usual.

BC Hydro’s board still needs to vote on the sale, while city and park officials will need to be enlisted to deal with disruptions to the streets and park near the site while construction is going on.

It’s anticipated it will take five years to build the substation. The new Coal Harbour school would be built by 2023. 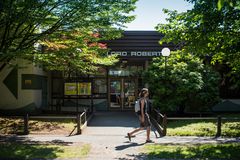