Canada’s public-health officers have frequently faced abuse for the work they’ve done during the pandemic, with at least one of them even facing death threats.

B.C. Provincial Health Officer Bonnie Henry, who was hailed as a hero for her calm and compassionate approach in handling the COVID-19 crisis in her province, said Tuesday that she has been subjected to hate mail and threats against her life.

"There are many people who don’t like what I do, or don’t like the way I say it, or don’t like my shoes and feel quite able to send me nasty notes, to leave phone calls, to harass my office staff,” she said at a panel presentation at the Union of B.C. Municipalities.

“I’ve had to have security in my house. I’ve had death threats.”

In the past few months, several high-profile health officers and politicians have spoken out, stating they have become targets of harassment and threatening behaviour. This list includes Quebec’s National Public Health Director Horacio Arruda and federal Infrastructure Minister Catherine McKenna.

Last month, a man was arrested and charged for allegedly making threats against Dr. Arruda.

Dr. Arruda said he had filed a complaint with provincial police in late July after personal information, including his home address, was shared on social media.

“You can’t just say anything on social media. … It’s read and it can incite people,” Dr. Arruda said after charges were laid against a 45-year-old man. “You have the right to have an opposing view, you have the right to express it, but we don’t need violence."

A spokesperson for Quebec’s Ministry of Health and Social Services said Wednesday that the ministry deplores such behaviour toward anyone.

According to Alberta Health spokesman Tom McMillan, provincial Chief Medical Officer Deena Hinshaw has received a wide range of correspondence from Albertans. He noted while this includes strong personal and professional criticisms, she has not received death threats or hate mail to date.

“There’s always going to be some people who are not happy with what you’re doing, and you know, and that’s to be expected, I think,” she told reporters.

Eric Morrissette, spokesman for Health Canada, said Dr. Tam has been the target of hateful messages, notably on social media. However, the department does not comment on specific security matters.

“Public-health officials across Canada have the best interests of Canadians at heart. They have been working tirelessly to keep COVID-19 cases as low as possible, and protect their communities,” he wrote in an e-mail. “Under the stress and strain of dealing with a prolonged crisis, it is natural to feel fear, stress and worry.”

Heidi Tworek, associate professor of the University of British Columbia’s school of public policy and global affairs, said research shows that female politicians could receive a larger amount of abuse as their profiles rise.

“The research is complicated and it’s constantly evolving,” she said. “And what it does seem to indicate, though, is that when people become prominent is when they received the most abuse or threats and that, potentially, is even more true for female politicians.”

She said the volume of the threats for public figures remains unclear based on Dr. Henry’s remarks. However, she added, even if it was a small amount, it was severe enough for Dr. Henry to require protection.

“The volume of positive praise seems to still be far outweighing this small amount of harassment, which is actually quite unusual, sadly, in the online environment. But of course, the consequences of that abuse could be quite extraordinary."

Prof. Tworek said threats against public figures have been made for a long time, but the online environment provides a lower barrier to entry for some people to do that. 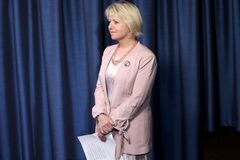